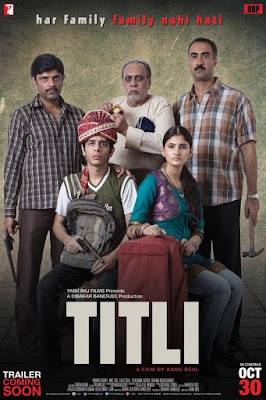 I have always had a thing for gritty films. (Lets just say I'm a nice enough guy in real life and so if I am expected to deal with mush even in the art forms I partake in, I will retch).

When in the right mood, I get attracted to such films like a moth to a burning candle. And like most moths that approach a burning candle, I end up burning my wings, either because the film is plain bad or, if I am fortunate, because it is so effective that I drown into depression.
But I will reserve that comparison for another day as that wasn't the case with this film.
Titli is an effective debut. I believe thats a fair way of putting it. But neither am I able to write about it as being brilliantly dark like Ugly or some such indie production nor would it be justified if I wrote it off as a lame attempt at making serious cinema.
The film made me sick in the stomach. I'll give it that. The characters and the plot are adequately twisted and the camera-work powerful enough to accomplish that much.
The background score, which in my opinion should have been used more generously, is haunting and sets the right tone.
Shashank Arora as the film's male lead proves that he has what it takes to carry an entire film on his shoulders. Ranvir Shorey is plain genius. He has an air of helpless menace around him that makes him both dangerous and unpredictable.
But all of this, and many other aspects that might make the film technically perfect fell surprisingly short at holding my attention through till the film's end. There are portions, especially in the second half, that felt empty.
I believe budget constraints could be the main reason for that. But I thought the plot needed some more development too, to bring out the intensity that the international trailer I watched a year ago promised to offer in abundance.
While the scene right before the end credits is executed perfectly, because of the underwhelming nature of what precedes it, the impact that that particular scene, again mixed with the haunting score, is supposed to have on you is somewhere lost.
If I were to rate it, I would give Titli a stern three out of five.
Its a good film and a mandatory viewing, at least for lovers of indie cinema is warranted. Rest can join too.
PS: I counted eight people in the hall I saw it in. THAT made me feel more sick in the stomach than the film itself. I mean, seriously people, your definition of good cinema is fucked up. Period. I see no point in even expressing my disappointment with you.


Catch the trailer here and decide if serious films is your thing too. Do note though, you only have two days to do that because just like other indie films that see a release once in a blue moon, this is going to disappear from theaters in no time: