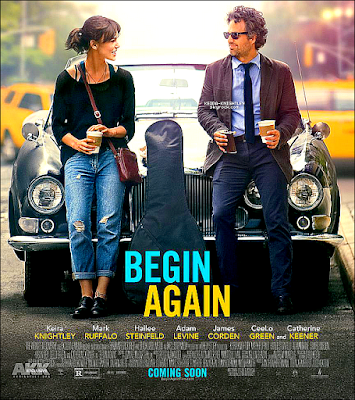 With Begin Again, Carney presents to us 'Once' more a film about a pair of down-and-out artists teaming up to make their own music, albeit this time unlike the last, the focus is more on making the movie more legit.. more wholesome, which in my opinion works both for and against it.
A budget much bigger than what he might've had on his first outing, the director opts for A-lister stars, professional camerawork and a visibly grand production value to spend it on... which is fine.
But I wouldn't have minded if there were less substance in the film and some more full-length songs to remember after the film ends.
Ruffalo and Knightley as producer and aspiring singer-songwriter is spot on casting. They certainly have the chemistry to make the now-romantic-now-platonic pairing feel genuine.
Also, shots of the band recording songs in public venues all across New York city are well done.
But for me the film didn't offer anything new or breath-taking unlike it's heart-warmingly simple predecessor.
A generous three out of five seems more than fair for this one.
Watch it if you have the time. But I won't recommend it over a repeat viewing of Carney's debut film Once. Nothing beats listening to Glen Hansard and Marketa Irglova sing their hearts out to some of the most sincere songs from the past decade you'll ever hear.
PS: If I wanted to make a fair comparison, I would say that this is to Once, what Bradley Cooper's Burnt is to Jon Favreau's Chef.
You wouldn't believe the amount of craving I felt for a cheese burger after I was done watching Chef. And that was after I'd already had dinner!
After watching Burnt though, I mulled over Bradley Cooper's fine acting chops for a bit, then took a piss and went straight to bed without a second's glance towards the kitchen.
Catch trailer here:
Catch the opening song from Once here: