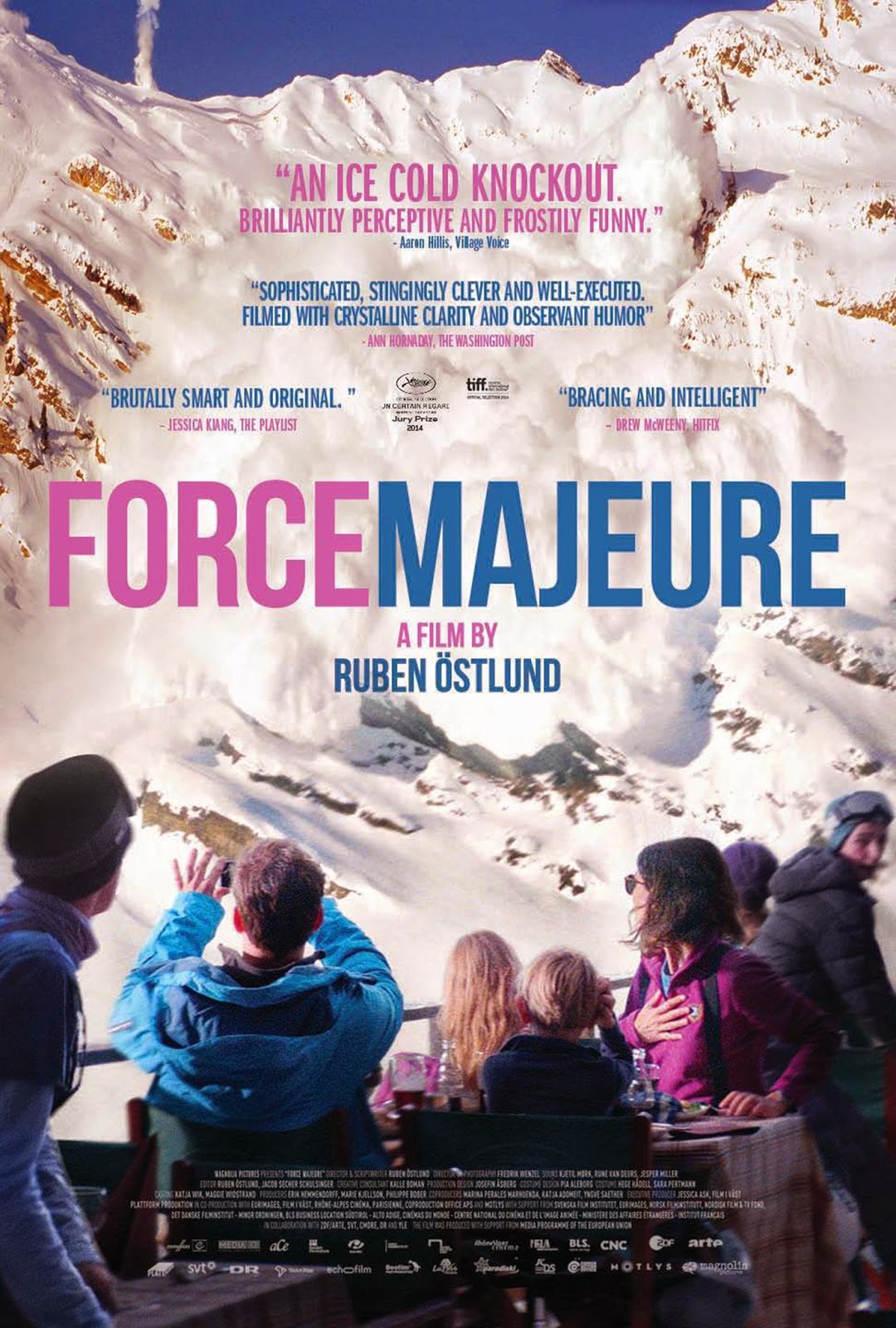 I am speechless. I think this levels with Tomas Alfredson's 'Let the Right One In' as the best Swedish film on my seen list.

Brilliant direction. Stunning visual imagery of boundless snow used as a mute backdrop for ordinary people reacting ordinarily to an extraordinary situation that presents itself to them at a point in their lives where perhaps only a pin prick was needed to let out the truth from beneath layers of manufactured happiness.

Are you man enough to protect your own family in times of potentially fatal peril?

If you think of it as a simple enough question to answer, think again after taking off your mask. You might end up thinking hard and still not arrive at a convincing response. 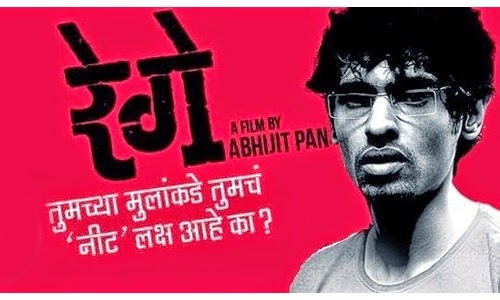 Rege is quite the intelligent film, playing with an intentionally scattered timeline that makes you think long and hard while attempting to put all the pieces together in your mind.

It is gritty, unpleasant and yet ensures that humor does not absent itself from the proceedings even as people kill and get killed.

Good thing I began watching with zero expectations (which is what happens when you have already watched two crappy films back to back in one day... John Wick starring Keanu 'I-just-cant-emote-I'm-sorry-I-just-cant' Reeves and another one with Steve Carrel in it) But even if I had kept expectations, I think I would still have been impressed.

Flawed to an extent, yes. But the film slowly grew on me with its manner of telling and ensured that I stay with it till the very end.

Marathi cinema produces another gem worth the viewers thought and time. 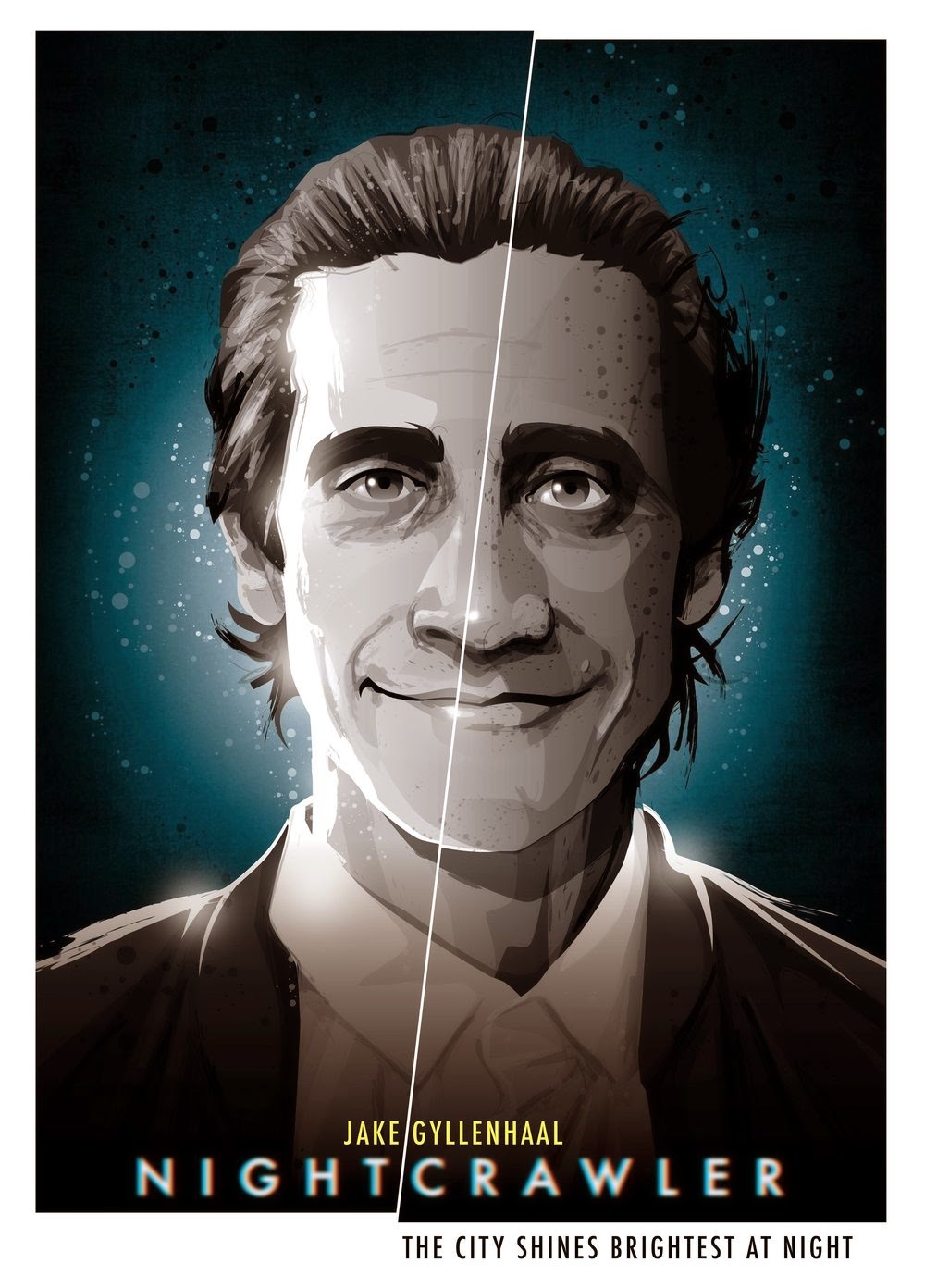 Lou Bloom, played excellently by a physically unrecognizable Jake Gyllenhaal in what could be one of his career defining performances, is a creepy, hollow-faced personification of the cut-throat corporate environment that exists all around us today.

Lou is a self-groomed crime newsfeed recorder who will do anything for his ambition of seeing his organization climb up the success ladder even if it means doing something illegal or immoral like dragging the body of a car crash victim ten feet to the right where the lighting is sufficient to get that perfect shot of a road mishap before the police arrive on scene.

I thought the dialogues between Lou and his ‘intern’ came eerily close to what an average employee might get to hear during routine HR and Business meetings at the office, so much so that I couldn’t stop smiling like an idiot while watching. I tell you, how easy it is to manipulate people into doing things they aren't even going to get paid for just by throwing words at their faces.

Apart from that, the direction is first grade and the camera work reveals a bleaker and a visibly more dangerous side of night-life in the city, including old-school chase sequences that are executed well enough to feel real and pressing.

With Keaton’s performance in Birdman being nominated for the Oscar, I doubt whether Gyllenhaal would have bagged the award for best actor had he not been snubbed (so unjustifiably). But had he gotten it, I wouldn't have minded the upset at Keaton losing.

The new benchmark for ‘creepy’ has now been established.

A stray rusty bullet to the heart of democracy

Freedom of expression must, by definition, be limitless and not be subject to the sentiments and beliefs of people. If taken any other way, this unique freedom is bound to die a painfully slow death at the hands of right wingers and other extremist/fundamentalist A-holes.

The ‘death’ of Perumal Murugan
By Nandini Murali

The author spoke of his contentious work, Mathorubagan, a week before he declared his "demise" after the religious Right burned copies of the book in Namakkal.

Perumal Murugan's Facebook post on January 13, 2015, was an obituary of his own composition. In it, the 48-year-old contemporary Tamil author announced his decision to quit writing entirely following widespread protests in his hometown Namakkal in Tamil Nadu. The outcry was sparked off in response to his novel Mathorubagan, published in Tamil in 2010, a recent English translation of which was printed by Penguin as One Part Woman.

"Author Perumal Murugan is dead. Only the teacher Perumal would be alive. People could have issues with my other books, that's why I've decided to withdraw them all... I shall pay due compensation to publishers. Don't indulge in protests and let me go," his post declared.

Murugan has a doctorate in Tamil literature and is Professor of Tamil at the Government Arts College, Namakkal, where he has taught for the past 17 years. His literary output includes six novels (three of which have been translated into English), four collections each of short stories and poetry and a lexicon based on the oral tradition of the Kongu region of North Western Tamil Nadu (which includes the districts of Coimbatore, Erode, Tiruppur, Salem and Karur).

Tamil writer and historian Dr A R Venkatachalapathy of the Madras Institute of Development Studies (MIDS), describes Murugan as a "scholar with a deep sense of history, whose literary rich ethnographic portraits of non-sedentary and lower caste lives animate his work."

Indeed, when I met him at his home in Namakkal last week, before he posted that lament on Facebook, and shut out the world, refusing to meet visitors, Murugan told me that Marxism was an "inspiration" that made him write about "my land and people with a sense of history and deep empathy."

Mathorubagan, translated into English by the writer, performer and activist Aniruddhan Vasudevan, is a story of the impact of childlessness on Ponna and Kali, landless agricultural labourers. Narrated with rare sensitivity and insight, the book raises several issues about gender, patriarchy and masculinity - all of which converge in a worldview mandated by narrow social conventions, that describe a childless marriage as incomplete.

Mathorubagan is set in the temple town of Tiruchengode, where the presiding deity is Ardhanareeswara (Mathorubagan in Tamil), the iconic half-man half-woman representation of Shiva and Parvati. The narrative, lyrical and terse in turns, follows Ponna and Kali's lived experience of the pain of childlessness.

Taunted by family and friends about their inability to have a child, despite being married for 12 years, the couple's otherwise happy life disintegrates. Potions, penance and prayers do not work their magic. Cornered, the couple becomes defiant, questioning these norms. (A strong counterpoint in the novel is Uncle Nallupayyan, who chooses to lead a single life and even questions the institution of marriage. He provides emotional support to Ponna and Kali, who begin to wonder if they too can live life on their terms.)

The family arrives at a "radical" solution. Much against her wishes, compelled by societal and familial pressures, Ponna agrees to participate in an ancient rite at the annual Vaikasi temple festival in the Kailasanathar Temple in Tiruchengode. The practice allows a childless woman the latitude to have ritual, consensual sex with a stranger in order to become pregnant.

Murugan grew up in Tiruchengode. As a young boy, during summer holidays, he sold soda water and cool drinks in the Kailasanathar Temple so he could fund his next year of schooling. "Even as a boy, I had heard of this practice of ritual consensual sex during the temple festival. In the absence of medical alternatives, this was also availed by couples who did not have children," recalls Murugan, who adds that the practice fell out of vogue in the early 1960s. "The children born of such a union were regarded as 'sami pillai' (children of God) or 'ardhanari' (halfwoman). In fact, I've known several people over 50 years who are thus named. There was no taboo attached to the practice, which was socially accepted."

The author explains that oral records and anecdotes testify to the existence of such practices. "When I began to write the novel, British anthropologist Edgar Thurston's masterpiece Castes and Tribes of Southern India was a valuable reference, where he records instances of such practices in several parts of South India, including Tiruchengode," explains Murugan.

Great literature enables one to transcend specifics and thereby acquires a universality that reflects essential human experiences. That is what Ponna and Kali's story does. Although it is set a century in the past, it invokes the sort of anxieties and stigmas associated with childlessness in contemporary society. The subtext of Mathorubagan is not a commentary on prevalent social practices. Rather it is an indictment of society and the narrow conventions that destroy people by denying them choices to live outside socially mandated roles.

For over a month, Murugan has been hectored by caste-based and religious organisations that branded the book as "blasphemous" and which claimed it denigrated the women of the Vellalar Gounder community (to which Murugan belongs) and the temple town of Tiruchengode.

On December 26, a mob led by the local Rashtriya Swyamsevak Sangh (RSS) president, Mahalingam, set fire to copies of the book on the streets of the town. A bandh was called in Tiruchengode last Friday and the writer was threatened with frightful consequences if he did not withdraw "objectionable" portions of the book.

The instigators were not mollified by Murugan's reconciliatory gesture - he offered to delete references to the town in subsequent editions. Forced to flee Namakkal, he, however, signed an agreement at a so-called "peace meeting" on January 12 at Namakkal, "promising to issue an unconditional apology, delete controversial portions in the book, withdraw unsold copies in the market and also not write on controversial subjects which could hurt sentiments of people."

Since I met him in Namakkal and following the mutilation of his work, the author has retreated into silence, cloaking himself from the outside world. Those that speak for him - writers, friends and acolytes who seek to further the canon - despair at the "passing" of a voice that is vital to Tamil literature and the chronicling of mores.

Kannan Sundaram of Kalachuvdu Publications, which has published Mathorubagan, is among their number. "Religious fundamentalism and caste affiliation is a death knell for creativity," he says. "Our experience as well as that of other publishing houses is that negotiating with fringe elements is counter productive. Perumal Murugan is an artist who is at the peak of his creativity. He needs to be protected and supported by people and the state, especially since he's a responsible writer."

The puritanical tenets that were summoned by Mahalingam and his gang to protest what they deemed prurient and degenerate are what hastened Murugan's death. They are the same impulses Sundaram denounces; they elicit the Whitmanesque warning that the dirtiest book of all is the expurgated book.