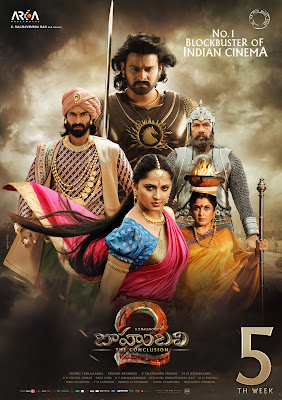 The bits that I liked in this are bits that are simply fantastic (opening credits, the coronation ceremony before intermission and most of the battle scenes, including the climax).

Then there are the other bits that range from your average Tollywood to below average Tollywood to the motherlode *waah kya power hai dialogue me* Tollywood, or scratch that *waah kya POWER hai dialogue me* Tollywood.
Ah fuck it, scratch that too *WAAH KYA POWER HAI DIALOGUE ME* Tollywood.
Nevertheless, I must admire Rajamouli's guts for dreaming this big and more importantly executing​ it this big.
The fact is, we are ultimately talking about a guy who through his career has made mainstream Telugu films that run on star power more than anything else.
Having understood this fact (and also knowing that (a) the film would most likely not work when watched on television with breaks, and (b) in Tollywood, songs are meant to be ignored unless playing in the background of critical scenes) I was able to appreciate what he got right in the first instalment without trying to compare it with stuff that big budget Hollywood produces.
As a consequence, I also found it very easy to ignore most of the vitriol that part one garnered at the hands of many cinephiles.
Now having seen part two, I will still say the same thing- avoid the mistake of considering these films as anything but what they are and what they are is 'mainstream Telugu action movies' presented as epic fantasy.
Within the confines of that definition, I have no hesitation saying that Baahubali 2: The Conclusion certainly is a commendable film.
Rajamouli has a flair for larger than life and he uses the CGI very well to bring that on screen. At many places I found the visuals were awe inspiring and genuinely blended in with the emotional elements of the story.
In comparison to part one, what it lacked was the poetic flow in certain battle sequences. And some bits were just too fucking loud.
But overall, I should say I liked it.
Will I watch it a second time on the big screen? No.
On a smaller screen? Some scenes, yes.
Still doesn't make it a crappy film by any means and it certainly deserves earning back double the money they spent in making it.
PS: Rana Daggubati is a superb find. Not just the physique, his dialogue delivery and even his body language are outright menacing.