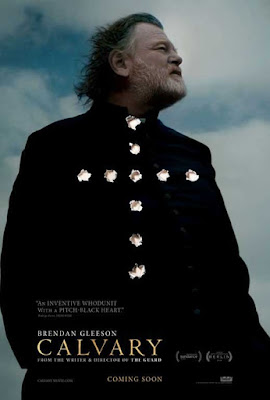 The Irish are the best when it comes to dark humour.

And this film proves just that (Although this time it is more dark than humorous).
A film that begins and ends with two of the most emotionally affecting scenes I have seen on screen, Calvary is odd in too many ways to describe.
Despite having seen it many times already, I somehow always seem to fall short of words when I attempt to pin down what I loved and did not love about it.
The film is borderline strange. Which is not necessarily bad, but makes the job of a reviewer not wanting to adore or thrash it outright, very difficult.
Shot on the picturesque landscapes of Ireland and featuring a power-packed performance by Brendon Gleeson as a good-natured priest who receives an anonymous death threat from someone in his community, Calvary contains a whole variety of characters, whose traits ranging from goofy to hurtful to outright sinister- and unpredictably so- make the story move ahead a tad unevenly, albeit never without plucking your interest.
Along the way, questions revolving around religion and human nature in today's times are raised directly and indirectly, of which few are quite uncomfortable and either lay bare the irrefutable logic of there being no real justice in the world for God's presence to be believed, or make us think on whether sometimes our messed up expectations from religion and God are more worrisome than the concepts themselves.
Sadly, most of these questions are left for the audience to answer on their own. Which means, the sub-plots more or less conclude as character sketches that were not meant to have any story arc to them.
Hence the mixed reaction.
And yet, I cannot get enough of the film. I am sure I will watch this again in the near future.
So, for now, I rate this 4 out of 5, if not for anything else then at least for how it starts and how it ends.
A lot may have been left for us to decipher but one message, however, that did manage to shine through brilliantly was this:
Patience and tolerance are and shall always be the right way. And on that I concur.