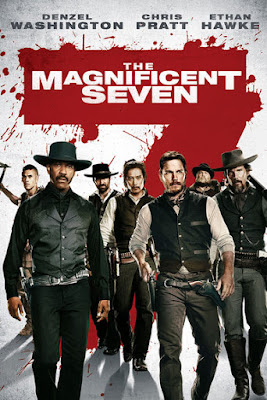 Far from being 'magnificent' as the title claims, this is as ordinary as cinema can get.
Denzel Washington's entry scene aside, am not sure if I liked anything about this film at all.
The soundtrack is lacklustre, the dialogues stereotypical, the storytelling conservative and the shootout from the second half is nothing short of a magnificent mess (I hope they weren't referring to this when they picked the name).
It takes a special kind of talent to produce an average film with such a stellar cast at one's disposal. And from watching his previous films I had a fair idea that Antoine Fuqua had the potential to display this talent.
A consistent absence of any unique directorial style, thats what I have noted in the five films of his I've seen so far. (Training Day was really good. But only because it wasn't a director's film).
Fuqua seems to prefer being in the backseat and that- as you would agree- does not bode well if the script isn't singularly powerful on its own.
I would rate this two out of five. I found myself rolling my eyes at the deaths of key characters in the third act, and that speaks volumes.
But that scene where Washington's Chisolm appears first in a bar is just really well done.
So, a two and a half still seems fair.
Its films like these that make me wonder if all that criticism Tarantino's western The Hateful Eight received (including from me) was a tad unjustified.


At least that man knows how to take charge of his fucking film.
Catch Trailer here:
at 9:19 PM