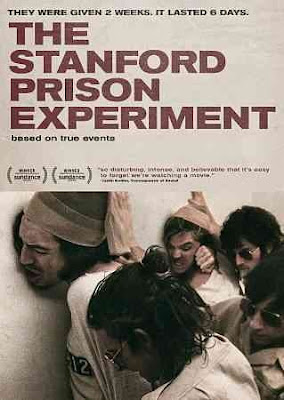 This was very intriguing indeed.

For a film that does not have any threat of death involved, The Stanford Prison Experiment sure did manage to keep me disturbed enough to keep watching till the very end.
For, it is disturbing, yes. But not in the sense that one would normally expect when a film promises to be just that.
Based on true events, the film is about twenty-four male students who were put into a simulated prison environment- half of them as prisoners, and the other half as guards- to study the psychological impact it would have on the subjects over a period of two weeks.
And to the surprise of Dr. Philip Zimbardo who arranged this exercise and who assumed that this would just be another boring two weeks spent over nothing, what transpired during the first six days was so shocking that he had to call the whole thing off before matters got any more out of hand.
I found the film to be engaging and- despite being based on a real incident- it held its own by not just playing out as a simple narration of the facts already available.
It has been to shot to induce enough claustrophobia into the prison scenes so that for the length of the film, you are part of the experiment while also being outside of it.
You experience the dread that unlimited authority can create in the average human mind and the copious amount of corruption that comes with power over other humans, but at the same time, you are not able to stop yourself from feeling ridiculous that human beings would actually allow themselves to be treated so degradingly without a word of protest just because they have been told that there is no way out- which I thought was a truly remarkable achievement, given (I repeat once more) how little the stakes of actual physical harm to anyone involved was.
The acting is fantastic, especially of the mock guards who seem to get a little too much into the skin of their roles. Billy Crudup as Dr. Zimbardo does a competent job.
Overall, I'd say, worth a watch, even if a tiny bit underwhelming on account of the source material. 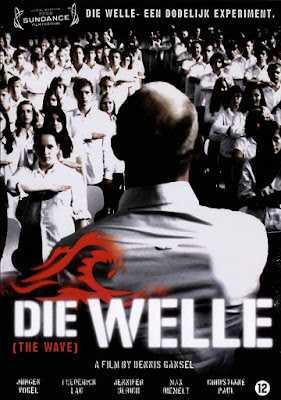 But... but, before I finish, I cannot help but mention another film of the same kind that I found to be much more powerful, even if not more disturbing than this (maybe because it’s NOT completely based on a real life event. Still, a film is a film, so)- The Wave which is a German movie (of course, it had to be a fucking German movie!) about a high school teacher's experiment to demonstrate to his students what life is like under a dictatorship.
Now THAT is one experiment where fatality cannot be ruled out. You fill innocent minds up with enough hatred towards a particular group of persons or object, teach them to make it their sole purpose of existence and send them on a mission while you sit back, relax and enjoy the show (or as they so lovingly put it in India- Mandir wahi banayenge. Of course they have another name for such 'righteousness' in the middle east but, meh, thats common knowledge so am not mentioning it here.)
Both films are recommended.
Catch the trailers here: