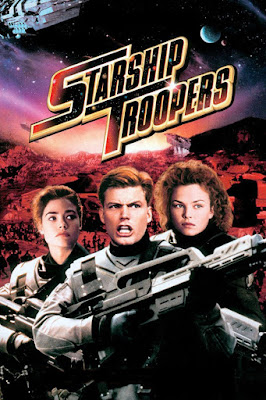 I've always wondered why I know so little compared to most other people my age.

I can't really blame it on one thing as I am aware that my ignorance of general knowledge subjects is too big to be anything but the culmination of innumerable stupid things.
But if I COULD blame it on one thing, it would have to be my childhood habit of watching repeat telecasts of films like this.
No matter how many times Star Movies aired this piece of crap, I would plonk myself in front of the TV and watch as if my future depended on it, while I gave other easily accessible sources of knowledge and learning a wide berth.
Starship Troopers comes a close second in the list of films I soooo want to call as good, but are actually quite bad. (Position number one is occupied by another film I am sure I hold a record of watching every single time it aired on TV between 2001 and 2005, Cool Runnings)
I just love to hate this movie and that is despite the portions involving gore and aliens being done right.
Two out of five.
The acting... Oh good lord, the acting in this film.
--------------
"Mr. Verhoeven, we start the auditions for lead roles today. Tell us what you're looking for."
"Hairless."
"What?"
"I hate body hair. Especially on the chest."
"Ok. And?"
"Should have straight teeth. All of them."
"Right."
"And perfect jawlines. I want those jaws and teeth to fill the whole fucking screen when I shoot a closeup."
"Fair enough. And?"
"Regulation size breasts."
"Erm. Ok"
"Thats about it."
"Right. Let me recap. So in your lead actors, you are looking for big jaws, small breasts.."
"No no. REGULATION size! I want'em there, just don't want'em bursting out of them uniforms, get it?"
"Right, yes. Regulation size breasts. And perfectly straight teeth."
"And no body hair"
"Yes! Of course. Most important. No body hair."
"Correct"
"What about acting skills?"
"You mean the jaws and the teeth? Haven't we covered that already?"
"No. I meant OTHER acting skills. Wouldn't you want versatile actors?"
"Versatile! I see what you mean. True, true. Cant make a good film without versa...err... whatever it was you said."
"Yes"
"So make sure you have a healthy mix of blondes and brunettes.. And what the hell, throw in a curly haired girl or two while you're at it."
"Got it. I'll be off now."
"But remember, regulation size."
--------------
Catch Trailer here: