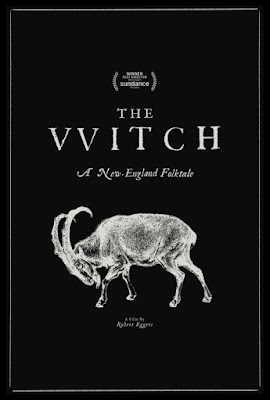 So... horror.
Not my favourite genre, for obvious reasons. By obvious I mean my obvious lack of interest, as a normal human being, in getting scared shit-less and then spending a day or two thinking about fucked up things that I know are not real but are things my imaginative brain leaves no stone unturned in making real enough for me to feel even more shit-lessly scared about.
The VVitch didn't terrify me, lets make that clear.
But I will also confess that this is one creepy little horror film that is going to be hard for me to forget.
Bleak from the beginning, and horrifying and disturbing in equal portions, the film has been shot in a unique, single-toned style that- coupled with excellent performances from all the actors- makes one feel completely immersed in the tale.
The background score is grim and adds immensely to the creepiness of each shot.
I thought that some scenes were unpredictable and quite sinister (read as- fucked up).
Each time there is silence onscreen, your heart is in your mouth and all you can pray is for a deformed hand to not appear from some corner and grab at the character's hair.
I don’t think I'd want to write anything about the plot. For a feature film it does not overstay.
So, I'll just say it’s worth a watch. Clocked at a decent hour and a half, the film managed to keep me hooked till its bloody end. And, despite its religious overtones, I think anyone who is up for a good scare can afford to see it once.
Four out of five. (Maybe I'll be less generous if I do watch it a second time though)