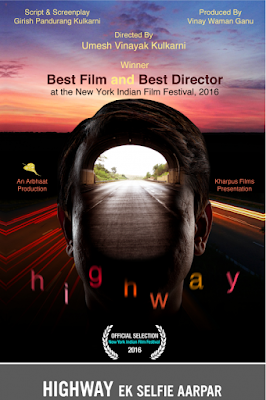 A choice presents itself to the audience when they see a film that is shot in an intentionally ambiguous manner:

A) You call it a pretentious attempt by the filmmaker at appearing more profound than it is possible for the average Indian filmmaker to be, and you leave the theatre before the end credits have started to roll without putting a second thought to it, or
B) You prepare yourself for this not being a film thats going to deliver to you a simplistic one liner 'moral of the story' that'll fall right into your lap; a film that will probably not unveil itself to you in its entirety if you aren't observing everything thats happening. Then, having calmed your baser instinct of keeping your brain idle, you understand- or rather 'attempt' to understand- the meaning of all that is being shown while judging the film purely on its artistic merit and not its ultimate objective. Then, you watch it a second time. And, if the artistic merit continues to hold true, a third and a fourth.
Now logic dictates, that anybody who has seen the trailer of Highway Ek Selfie Aarpar and subsequently ventured out to see the film, will be wary of both A & B above and also of the implication of selecting A over B, or B over A.
The hall I watched the film in was packed (which was heartening to see albeit only a puny consolation to the fact that the film currently has only one show per day at only one theatre in the whole of Bombay).
The crowd guffawed at all the right places in the first half, seats getting slapped and people rocking back and forth with laughter as they saw on screen the little details from ordinary lives that make for stand-out idiosyncrasies when presented in a particular fashion, on celluloid.
Then came the second half, sacrificing pace for meaning. Somewhat flawed in execution, I can be honest here, but still- effective.
And some fucker decided to exit while the film was still playing.
A over B.
'Good riddance', I said to myself as Mangesh Dhakde's melodiously piquing background score lured me back into the story, that had by then reached a point of philosophical high.
Two more exits. Then four.
Then a whole row got up followed by another two rows, as if the first fucking A-hole who had exited the hall had decided it for the whole lot of them that 'A over B' is THE guaranteed path to attaining oneness with the universe.
As the end credits rolled. My friend and I, and a handful of other 'B over As' stood at our seats, pondering, replaying the scenes in our heads, each of us fascinated at Umesh Vinayak Kulkarni's capacity to enthral and make a viewer feel the need to ask questions, all without resorting to high-handed, Rust Cohle-esque monologues.
'I need to watch this again. Atleast one more time before I can say that I got all of it', I said to my friend and he nodded, his eyes reflecting the same hunger that my eyes must've been shining with; hunger to know more about a film that, if you ask me, boasts of many things, a few of which I am listing below for your benefit:
- stunning camerawork
- well paced screenplay
- grounded dialogues
- stellar performances from the cast including Girish Kulkarni, Mukta Barve and Shrikant Mohan Yadav among numerous others
- excellent music
- and (last but not the least), one of the best opening shots I have seen till date in any film- foreign and Indian. A shot that is bound to induce nostalgia in any man who has walked the streets of Bombay and witnessed the level of economic divide that is so blatantly visible in this city.
It is saddening to see the strength in numbers of the unappreciative 'A over Bs' and their equally unappreciative companions who snubbed the film altogether without much cause.
A selfish reason it may be, but I am very disappointed that because of the collective many whose choice of cinema is as bad as their choice of political leadership, I am now deprived of a second viewing of a film that deserves one, to perhaps understand its motives, its loose threads, a little better.


I only hope that other films like this meet with a brighter fate.
Catch Trailer here:

What is the poem recited in the movie?

What are the lyrics of the poem 'Shukar Tara' recited in this movie and who is the poet?

I'm not really sure. Got anything in google?