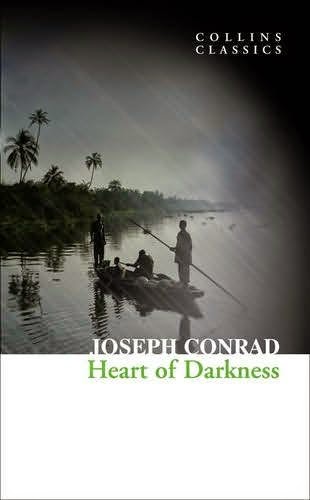 “What thing, most common of all, frightens men?

Ghosts, you say? White contours of the see-through kind floating through dim-lit corridors and lampless alleys? Nay, I think not.

Ghouls, you say? Phantoms from the past bound by rattling chains, clotted wounds and of unfulfilled vows, bemoaning? I do not concur.

Or death maybe? The ultimate, the penultimate. Would that, a response, appropriate enough be?

(Impeding all, exempting none
all good all bad it meets as one
A stab to the soul, as sharp as steel
the pang of end, ye’ll ever feel)

Nay, I say again even in knowledge, full, that death be feared by many in number. Fear of death is a petty fear, nonetheless.

‘tis but the unknown! Aye, the unknown, that frightens men, most common.”

I found Heart of Darkness to be a frightening novel.

I am not humoring the reader when I write that this seemingly puny book, a hundred and one pages thick and weighing less than the average smartphone, managed to scare (scar) the shit out of me, all for one reason- it laid bare, in my mind’s eye, the sheer gut-wrenching capacity that the unknown of our world holds for wreaking havoc.

And I think, it managed to scar (scare) me even more, for another bigger and indubitably eerie reason- the ‘unknown’ that was being laid bare in my mind’s eye was not external to me but within me. For, the unknown being described was human nature and its unpredictability.

Yes, my nature. Our nature. The nature of a being that has so advanced in its capacity to think, that it somehow fails to acknowledge the presence of darker, murkier dephts in its own mind;  the dephts that remain unchartered, only so rules of society and morality may continue to be upheld.

A civilized society. The last line of our defence against the natural darkness, mayhap.

What then, is to happen of such depths when society is absent altogether? Or when its fruits are not too enticing for a man to continue to uphold its rules and regulations?

‘The horror! The horror!’, echoes from Kurtz, our antagonist, in his dying breath. Kurtz is a man for whom these dephts have not remained unchartered since years. He is a leader for others in an isolated part of the world where the semblance of society is not required to be maintained.

And it is in his last words that I found the phenomenon of human nature, in its darkest, best explained.

The book is presented to us, as a first person retelling of his experience to his crew, by Charles Marlow, a weathered steamboat captain who had been assigned with the task of relieving Mr. Kurtz of his duty as an Ivory trader in the forests of nineteenth century Congo. Cast into the African forests by his mission, Marlow encounters overwhelming absurdity in his surroundings that makes him question his own contentions of nature and men (in turn making the reader do the same).
Heart of Darkness is a novella. I say this only for the benefit of all who choose to heed the advise of a reader who has erred already in attempting to read it first as a full fledged novel. It ends on page one hundred and one and is supposed to be read as a story that is only a hundred odd pages long. Period.

I took two whole weeks to finish the damn thing.

And in that exhaustive process of trying to keep up with such a complex narrative for such a long time, I believe I failed miserably in grasping the essence of the style and plot in my first read. Then came one fine Sunday, when my folly struck me as quick and harsh as lightning.

And the second read, surprisingly, took a mere three hours despite the heavy Victorian era wordage.

As is the case with most existential narratives, Heart of Darkness does not have a moral to underline. It is simply an attempt to describe to the reader the irrationality of life. It is an attempt to scratch the surface of the darkness within us.

And it succeeds in doing so with such a distressing flow of gloom that the events narrated by Charles Marlow, the brutal deeds of Kurtz and the terror-inducing depiction of the Congo forests continue to haunt you for days after you are done reading.

A must read for all who can decipher its intent and wish to do so.

Ten for the price of None

November, for me, has always been a time of looking back the way I’ve come and taking stock of what and what not has been achieved in the months that have slipped through my grasp already since my last Nameday.

Most of my Novembers, therefore, tend to begin on the worst possible note, marking the beginning of the aforesaid responsibility (now impending) and then proceed to hit even lower notes with each succeeding day as I contemplate harder on what exactly was it that I had set out to but could not accomplish during this interlude that has galloped away into my past so swiftly and so indiscernibly- straight through my person- leaving not even a hoof-mark on my tanned temple.

But, seeing as the dreaded November is still a full day’s ride ahead of me as I type this, I am finding it impossible not to seek a middle ground, a kind of consolation for my troubled conscience, by forgiving the writer-who-doesn’t-write and celebrating the reader-who-reads-fine-enough in his stead. Why not simply shed the intent of making a desperate attempt to rekindle my penchant for the verbose? Why not leave it be, for one of them dreaded November days to crib, eh?

And what better way to do it than taking stock of the gems I have been lapping up all this while that I haven't opened my word processor to write an original tale.

(Oh what gems these were indeed!)

Thus, what follows, for the audience to endure, is a series of reactions on the ten literary titles that I managed to gobble up since my date with the King in April; via his memoir- On Writing.

Of course, what follows still remains the desperate attempt of a writer to rekindle his penchant for the verbose; only in disguise.

But I cannot help it. Somethings just lie in your bones.

PS: To keep things interesting for myself (and also because its past bloody 2 in the AM already!) I unveil them to you in the order that they strike me, which means- in no particular order.


This here is some fearless piece of filmmaking by Bhardwaj. I am pleasantly surprised as to how this ballsy adaptation of the Shakespearean tragedy ‘Hamlet’ even made its way to the big screens despite the questions of identity and patriotism that it raises, which according to many is blasphemy.

I do not have knowledge of Basharat Peer’s Curfewed Night and hence cannot discuss the resemblance that the story might share with the book. What I do have knowledge of and what I can and will mention as a comparable piece of art (ballsy art, to be more specific) is Rushdie’s Shalimar the Clown.

Rushdie’s tale of a tight rope walker from Srinagar who is forced to take up arms against those who wronged him had succeeded in putting a serious dent in my oh-so-righteous logic that my nation can never be wrong in anything that it does as a nation.

I want to urge any and every citizen of our loving democracy to watch this movie, if not for the mesmerizing portrayal of personal-level devastation which the characters undergo, then for the picturesque yet heartbreaking depiction of the real Kashmir which the plot lays bare- Kashmir as is, nature and men, beauty and beast moulded into one; and not the Kashmir that is imagined by the fascist patriots and the patriotic fascists of our country as a piece of land that must remain forever voiceless.