'Who do I make it out to?' I am asked, just as I am recovering from a series of shocks, namely:

(A) realising that you have made a two hour journey from your home to that part of the city you despise the most- battling rains and cancelled trains, that too on your day off- all for getting your favourite author's signature... WITHOUT CARRYING A FUCKING PEN!,

(B) then, realising that the lady at the counter whom you have asked for a spare pen has- unintentionally, I'm hoping- handed to you one that looks more like a tooth pick than something a person can write using,

(C) then, realising that you have just walked up to a man you personally consider a legend and shook his hand and mouthed your pathetic little ditty that goes 'Big fan sir, really big fan...' in your pathetic little voice, only to then hand him your copy of his book alongwith the previously borrowed toothpick as he stares uncomfortably at it- the way gods used to wielding tridents and and sceptres and what not are bound to stare when handed nail-cutters and can-openers. 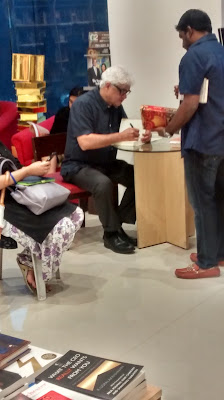 Your mentor is polite enough to hand the pathetic-excuse-of-a-pen back to you, borrowing in its stead, a real one from another reader who- unlike yours truly- clearly understands the importance of carrying a decent fucking pen when attending a book signing event.

To which I reply, having picked the worst possible moment for forgetting that I go by a pen name.

Another brief handshake and I managed to mumble a 'nice meeting you, sir' before he was off again.

Terrible, terrible day I tell you. But totally worth it.