Shame- A novel by Salman Rushdie 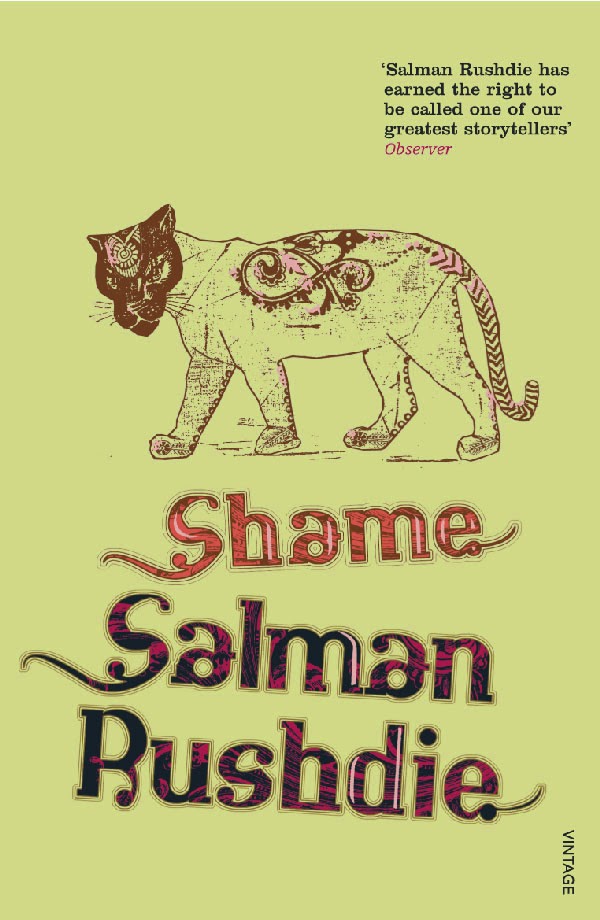 The fifth one that I've read of his works till date and he continues, as always, to enthrall me with his sheer lack of fear in expressing thoughts.

'Shame' is full of metaphors that draw inspiration from and cumulatively point finger towards the real life situation of our neighbour to the northwest, being a country built with a single religion as its solitary foundation stone. The tale revolves around a metaphorical town referred to as Q. of Peccavistan wherein the characters are based and the plot unfolds.

The esteemed author leaves no stone unturned in expressing his disbelief and utter disgust at the fact that a nation can claim itself as cleansed of all wrongdoings and sin because all our doings are the sacred word of God and how can God be wrong? It is on account of this self-proclaimed belief, being literally rammed down its citizens' throats, that the shame of not having truly succeeded in curbing any wrongdoings goes unexpressed. What is unexpressed does not, by default, have any existence- is the propaganda of the rulers. So the pertinent question here is-where does all that unexpressed and bottled-up shame go?

It has to overflow some day! It has to lead to a rupture somewhere, does it not? The sense of pride, that all encompassing, blanket-like emotion which is felt when mouths lips tongues wag of their land protecting the dignity of women, of all women, by covering them up from-head-to-toe, by declaring such covering up from-head-to-toe as a mandate sans deviation, oh! that shroud of pride that makes nostrils flare and eyebrows part because outsiders are watching and when outsiders are watching the nostrils must flare and the eyebrows must part, the pride must be shown, no matter how much the heart knows of the arithmetical progression of the number of whorehouses and the geometrical progression of the number of rapes and abuses, the pride must be shown, the achievements must be expressed, for if not expressed then how can pride exist? and if not spoken aloud of then how could it be that we have achieved anything at all?

I could go on ranting till day end but, unlike the characters in the book, I do not like imposing my views on other people so bluntly. It is all for you, my dear reader, to decipher to understand and ultimately to execute atleast in your own life the need to abstain from combining Religion with Being good at all times, for you may or may not speak your heart, but it is the naked truth that neither mirrors the other completely.

Religion has its own bowl of villainies; Being good its own pitcher of weaknesses.

Philosophy aside, the writing flows, as I have experienced before, like water from the author's pen. Especially in a five paged part where Rushdie describes with such beauty and skill the embroidery-work on the eighteen shawls sewn by Rani Harappa that depict with exquisite detail for her disbelieving daughter to see, the darker side of Iskander Harappa, her husband, whom their daughter refuses to consider as anything but great. The pictures are etched into the reader’s mind with such pain and passion, each word oozing with the love to express and the fondness of writing prose.

In a manner of speaking, the characters are themselves metaphors that are used to describe the phenomena of shame and shamelessness. The protagonist, Omar Khayyam Shakeel, as he himself admits somewhere before the end, is a peripheral hero, a chief character who looms at the sides of the story as the side-characters prove more a cause of the end, through their heroic deeds and chief-characterly actions, taking Omar Khayyam alongwith them, as a repercussion rather than a source.

The pace of the novel deplores you of any time at all to comprehend that what you are reading is actually fiction, that the characters are only made up of words, and that the story employs magical realism to move ahead. I would not go to the lengths of calling it breathtaking, but it does have its moments that might justify it being called so.

Halfway through the novel, I felt like I was reading in a trance, the wordplay making me melt completely at places. Nowhere did I feel that the philosophy had become greater than the characters and overtaken the narrative. Nowhere does the author resort to the ramming-up-the-throats strategy of his criticizees.

All in all, a dark satire, an excellent blend of truth and fiction, a deserved read for all.

PS: Despite the praises that I’ve showered till now, ‘Shalimar the Clown’ continues to be the best of Rushdie’s five that I’ve read. Just go through it and tell me that you beg to differ, I bet you a million bucks!

"the nostrils must flare and the eyebrows must part, the pride must be shown."

haha, they must indeed. Good Review.

Religion & Morality are deliberately confused by the ruling class for the obvious premium they derive from it. It is a Shame.

Check this out too - http://www.youtube.com/watch?v=xscvtf65l1E

Very well written review.....the gist of the book,beautifully put across by you,has created a feeling of inquisitiveness inside me to explore how a harsh truth can be depicted using a subtle fiction....you have a great sense and style of reviewing...u dont spill the beans but at the same time you also create a lot of turbulence inside a person to actually discover it....i m sure that Mr.Rushdie would also like to reread his very much own write up after reading you...:)