Overview –
For a guy who has written titles such as Ten nights in Ten Haunted Houses, Ten . . . Haunted Graveyards and Ten. . . . Haunted Castles, Mike Enslin is barely of the believing kind. His series, as the titles imply are adventure/ horror narratives of his one-night stay at places that have been termed as haunted. All three titles are on the list of New York Times Bestsellers and Mike’s upcoming volume in the series revolving around haunted hotels requires him to spend one night at the not-so-coveted room 1408 of Hotel Dolphin.

Despite receiving several fore-warnings against his visit, Mike arrives at the Hotel wearing his lucky Hawaiian shirt and a habitual cigarette stick stuck behind his ear, and proceeds with his stay, confident of a smooth sailing through the night. But as it turns out, Room 1408 has its own plans for Mike. 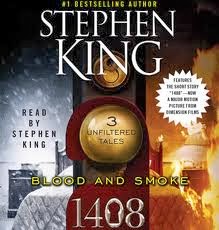 1408 is a short story that began as a three-paged sample piece as part of King’s non-fiction book ‘On Writing’. The excerpt was to be used to explain how the story evolves over a number of drafts but as the tale progressed, to the reader’s good fortune, King couldn’t help himself and decided to write till the end.

The story begins as Mike Enslin walks through the doors of Hotel Dolphin, a not-too-grand-yet-elegant-and-sophisticated-in-its-own-way-hotel, where he is about to spend a night in room 1408 that lies on the fourteenth floor of the building which is actually the thirteenth. He is met by the hotel manager, Mr. Olin, a pudgy little man who knows too much about room 1408’s blood-spilling history to allow Mike to carry on with his plans.

Escorting him to the manager’s office in one final attempt to dissuade Mike from proceeding further, Olin begins describing, first the effects that the room has had on the people who have been in it for brief periods, then moving on to the chilling and gory details of the dozen or more unnatural deaths that have occurred in the room right since the year it was thrown open to public.

This conversation between the hotel manager and Mike forms a major part of the story and here lies, I believe, the King’s real strength, as inch by inch he raises the bar of terror and intrigue with each description of the room’s unpleasantly mysterious past in both Mike’s and the reader’s mind. By the time Mike walks out of the office, into the elevator and up to the fourteenth floor of the hotel, the inimitable aura of gripping tension is already in place like an open can of fuel waiting for the brush of a lighted matchstick for the main event to take place. Even as the doors of the elevator shut slowly with Mike having gotten out of it, Mr. Olin standing inside it pleads- Please Mike, don’t do this.

But Mike Enslin, doubt-ridden, his confidence shaky, still continues walking lying to himself that all this build up the manager has given is an act.

Akin to the narrative style which he deployed so effectively in his first book Carrie, King runs back and forth in timelines, describing in places from the POV of a narrator who is speaking after the events have transpired and then quickly jumping into the scene for a live feel of the so called paranormal happenings that take place right from the moment when Mike sets his eyes on the door of room 1408.

And I must admit, despite the inclusion of a few “orthodox” scare tactics, the overall impact that the account creates in one’s head is scary at an altogether different level. It is only for a mere seventy minutes of the night that Mike actually succeeds in his quest albeit he will never call what happened with him inside the room as a success by any means. The plot is unfolded to us in small portions based on what little legible recordings the pocket tape recorder that Mike carries with him has been able to capture.

I found the descriptions of the degrading quality of the recordings and also the rise of absurdity in Mike’s tone with the passage of time to be more intriguing than the actual physical transformations that take place inside the room such as changing portraits, images of the room’s previous victims, etc. Perhaps it is the combination of both that eventually pays dividend but the horror that takes place inside Mike Enslin’s mind moved me to shivers when I put myself in his place.

Of the many scare tactics put to use by the esteemed author, the one that stood out and the one that literally made my hair stand was the lines that Mike hears in the voice of a talking electrical hair clipper when, in his attempts to escape from the room, he picks up the phone receiver- This is nine! Nine! This is nine! Nine! This is ten! Ten! We have killed your friends! Every friend is now dead! This is six! Six!

Eventually having accepted that the room is indeed what Mr. Olin has described to him and perhaps much more, Mike tries to escape from it even as his thought process gets derailed and the room shows its true self to him which is that of an organism that feeds on its occupants. There are no ghostly presences in room 1408, Mike realizes, -ITS JUST THE FUCKING ROOM THAT IS DOING IT!

Now, as an ardent Stephen King fanboy, it is at this stage of the review that I would go to any extent possible. . .  seriously! Any extent possible to keep my fingers from typing. But the collaboration demands honesty and so I move on to the section of what didn’t work for me. And I think, there was just one thing that I found to be a. . .  how may I put it subtly- a shortcoming. I felt that the author invested such great an effort in building up that terror-inducing aura during the conversation that precedes Mike’s stay at the room only to reduce the actual stay time to a paltry seventy minutes, which albeit being a very good way of asserting the room’s strong effect on people, gives very little time for the reader to react to the events. I felt that there could have been more in this than what was written before Mike finally gets out.

But, overall, I must admit that this is one hell of a horror short story! An expert mixture of the classic plot of a haunted hotel room and the absurdly unique narrative style of the master of horror. A must read for all.

(PS: Stephen King has himself admitted to the audio book of 1408 being much scarier than the print version. And that is going to be my priority for today : ))

Interpretation of the end –
******* Spoiler Alert ********
The story concludes in a simple fashion leaving little scope for multiple interpretations. In the delirium that his mind is entangled in with more than an hour spent inside room 1408, Mike Enslin lights his shirt on fire. The flames burn his chest skin, perhaps awakening him from the confusion just as the walls of the room are opening up, making way for whatever it is that feeds on the occupants. Mike manages to unlock the door and run out of the room just as the room has almost caught up with him. He gets doused in ice water by a passerby and is eventually rescued.

However, like the other people who have lived beyond their visit to room 1408, Mike faces several health problems after getting out, he knows that he will never be able to write and has developed an acute fear of the colour of sunrises, that distinct colour that haunted him inside the room whose digits add up to the number of the devil.
at 2:02 PM