Stephen King- On Writing: A Memoir Of The Craft 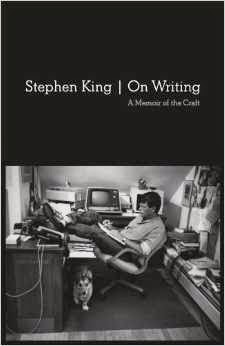 This book had been on my radar for about seven years and some. The initial reluctance that marred my judgement on buying a copy must have been due to my below par financial standing on most occasions (cost is 1000 bucks and upwards based on print/layout quality).

I confess now to another reason behind it- despite my reverence for King that only increased with each passing day over these seven years, somehow it got into my head that although this guy can write fantastic, he won’t do shit’s worth of good for me as far as telling me how to write is concerned.

Do not get me wrong here.

Two books that I chanced upon as a beginner reader and which shall always stand out for me as enthralling were this guy’s creations (Dark Tower- Drawing of the Three & Dark Half). And that was twelve or maybe fifteen years ago. I didn’t know who Stephen King was back then. So it wasn’t the name on the front cover of these books that made me pick them up from the racks of the library back while I was in High School. It might’ve been as fantastical a reason as fate that made me do it, or just that I was lazy enough only to select the ones stacked on the nearest rack. Whatever it was, I loved those books and I devoured them as I had never devoured anything edible put into my hands.

The reason why I listened to my gut feeling, that (stinky/ poopy) thing that told me to steer clear of any guidance from this guy was because THIS GUY IS A PURE FUCKING GENIUS. And when you wish to learn art-form from geniuses, more often than not you end feeling low about yourself, stupid even. The idea that I might read the book only to find out that whatever I was proud of achieving as a writer till that moment in reality amounted to jack shit scared me to death.

Role models are like long rides through snowy mountain valleys. On one side there is this absolute childlike delight inside your head that all that shiny white stuff covering the ground on your right is not shaving foam, or worse cheap paint like the ones they put on government buildings; its snow, its the real fucking thing!
Hurray!

Then you happen to glance to your left into the vast expanse of nothingness running inches alongside your jeep’s tyres. So there is that on the flip side to make you think that perhaps your wife was right, perhaps the beach would’ve been better, because atleast they’ll find a body in one piece if I drown, unlike the resultant splatter of blood and bones decorating some jaded penis-shaped rock at the bottom of the valley if my luck has it that the tyres grow a conscience and decide that strafing left on this particular route of the journey is their birthright.

Seven years is a long bloody time. I have grown (sand dunes, stalactites and stalagmites take lesser time than this so don’t you smirk at my self-confidence dear reader)

I believe I have matured as a writer and much more as a reader. There’s a lot of content that gets filtered out from my head now when I’m reading, especially when what I’m reading is something different in terms of style. Also, I understand now the difference between good reads and inspiring reads, the latter meaning Faaack-I-wish-I’d-written- this-first reads. The former are the category you could compare with drinking water. Important to do, yes. But once the piss hits the bottom of the commode, its all gone and refills are in order.

So with that in my mind (and the fact that my financial grounds are no longer shaky) I finally bought it. After having finished the book, my conclusion- I SHOULD’VE BOUGHT IT SEVEN YEARS AGO.

And now the disciple, the protégé is proud to declare to you o reader that his master, his mentor works EXACTLY like him.

Oh! The pussy I was not to have read it all these years spent in that puddle of exhaustion, trying and failing and trying again to console myself that writing without a pre-planned plot inside your head is not a sin. It is OK. Infact its effing great ‘cause if you can’t guess whats going to happen next in your story then how can the reader?

Anyways, enough about me. This post pertains to my mentor. So moving on. . .

To put it in as subtle wording as possible- it is common belief that Stephen King exists only for one thing, scaring the crap out of people. (Not spook. Not flinch. Not recoil or some other feminine expression that flows from the noble-minded’s tongue when he is thinking of something that made him perspire akin to a pig while reading) ‘Scaring the crap out of someone’ is as restrained an expression I can muster in this regard.

But to someone who has read enough of his stories, Stephen King will always personify that seemingly insurmountable peak of becoming a millionaire by doing the thing that you enjoy doing the most which in this case is writing fiction.

In fewer words- He’s the man. On Writing is the biography of both the man and the craft that made him into that man (or is it the other way around?)

The book is divided into various chapters, the three key portions for me being his days before becoming famous, his view on writing and last but not the least, the accident that almost killed him.

As is expected, King provides snippets from his childhood and teenage that are both depictive of the adverse background from which he surfaced and also hilarious, laugh out loud material at the same time. (Sketch for your perusal: boy-alone in the woods-tummy grumble- squatting on the tracks- think toilet paper equals leaves- job done-find leaves equals poison ivy).

While the pacing of the content is akin to his fiction narratives, the tale of his real life throws light on some very pertinent questions, the most important of it being: are you actually writing? or are you just making stuff up in your mind and then letting it rot there without doing little else than calling yourself a writer?

The now famous Stephen King was once like all other wannabe writers sitting at the back of the house, collecting rejection slips from B-grade magazines that found his work to be of the its-good-Not-for-us-but-good-though kind. A majority of his days were spent doing odd jobs at a power-laundry and a weaving mill.

And I suddenly realised how silly my struggle with going full time as a writer looks compared to his. My so called efforts seemed so fickle and shallow. Here I am, three years into having declared to the world that I am phasing out of accountancy and moving towards a more creative future as a writer. There is not a single manuscript in my lap. Let me rephrase my statement to bring it closer to reality. Here I am, seated in an air-conditioned room with a cushy mattress and a pair of fluffy pillows bearing the brunt of my obese ass and giraffe’s spine from below in that order, as I while away my time in doing something that shall in the end amount to nothing as far as the completion of my novel’s first draft is concerned.

Of course you could call this as practice. Practice is always good right? Sorry to disappoint you dear reader. It isn’t so, my King says in one chapter. And I agree with him.

If there is a story that I want to tell badly and if I’m serious about whether I want to tell it or not, I will write that damn story. Not practice to write it. Agreed that there are moments of creative bulb glows that make you think- I am too fucking immature to do justice to this tale. In most of these situations, you might even be correct. But come on man! You’ve got to begin somewhere, right?

And so I have begun, afresh (unlike my previous And-so-I-have-begun moments, this time I’m feeling up to the task as I know now that there are no right or wrong ways to write a book, you just have to write the darn thing. Wrong can be righted later. This ain’t public speaking you see).

On Writing also provides budding writers with invaluable guidance on how to use the tools of the trade- vocabulary, grammar, character development, situation, plot, style etcetera etcetera. I found all the sections from this portion to be extremely practical and doable. No highhandedness involved. Pure effort based writing tips. The magic is there alright, but can only be unearthed as you dig deeper and the only way to dig is through writing regularly.

The third section of the book deals with the accident that King had in 1999- a near-fatal incident that almost cost him his legs and his subsequent road to recovery.

“Writing did not save my life- Dr. Brown’s skill and my wife’s loving care did that- but it has continued to do what it always has done; it makes my life a brighter and more pleasant place.”

That sums up the section pretty well I think.

Verdict: All in all, I wish to say to you, yes you who have always wanted to write a story for ages, you with the fingers on the keyboard and imagination running wild: Read this book.

Read it now. Still having doubts about it?
Do trust me on this one.

Seven years is just too much time to count as wasted by a writer for lack of genuine direction.

From moments of him shitting to making people ...

I reread this post again today, the last time I read was before my big shot at the Finals, and I must say, I was lured into this Author after reading your post.
Looking at your seven years I now feel I let my seven months get wasted on this not being discovered.
Will surely buy it, read it, and spill the beans on my learnings through it.

See now this, I like. your use of smilies is certainly interesting :)

How do you write reviews like this! Probably, you should teach us that! Good one! On writing is my most favourite book too!