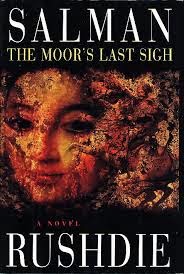 As I begin to write here of my take on this peculiar book, how badly it is I wish that this were my first acquaintance with Rushdie’s penmanship.

For had this been my maiden read of Rushdie’s work, and had I, in what could only be a bout of excessive self-belief, gone on to write a review on it then, how different the whole damned piece would have come out from my fingertips. (flown out, to be precise).

As line after line (wave after wave) of deserved adulation for the author and his proclivity for language made its way onto the tedious blankness of digital paper, what thorough a recommendation it would have been, with me egging any and every reading git and gittess to lay hands on this book without a second thought.

‘An ocean of praise’ is what would have been my review of The Moor’s Last Sigh, my dear reader, in that ideal parallel universe; with admiration drooling from me like dribble from the jowls of a dog that has just been fed half a biscuit and is now expecting the hand that usually feeds it to throw the other half at its face.

An ocean of praise celebrating this magnificent writer for his capacity to depict the morose, the morbid and, not to forget, the absolute grotesque, in a way (If you will believe me) that makes the entire thing seem so colourful and so jolly.

His ability to weave into one book such copious amounts of subplots, each of which has more story in it than what the alleged ‘bestselling’ novelists of our country might be able to produce in all of their writing careers put together;

His passion for bringing out the ugly and the vile in men and nations, the truth that we refuse to accept and admit after having swept it under the rug so nicely that after a point there seems to be no other way of proving its existence then through overtly fictitious characters and their overtly fictitious tales;

His knowledge of history, politics and people- of india and in general- which he mingles and spices up with magical realism (and sometimes political incorrectness) to give it that lip-smacking taste of a narrative that simply melts in your mind’s eye;

And more so, his commendable feat of bringing to life some of the most fearless female leads I have ever been made to imagine, fearless in that true and raw sense which we seem to have forgotten the meaning of a long time ago, perhaps at that point in history where some fucker mistook Victorian preachings on ‘decency’ as the preachings of our own ancestors and began looking at the real, bold, open-to-sensuality legacy of our true predecessors with a shaming, discrediting eye.

‘How is this chap even able to hold so many subplots together in one bloody book? What strings are these that bind them together and yet remain so invisible?’ I would have asked you, with awestruck sincerity, wanting to address the elephant in the room, the open secret.

‘How can his fucking story even fucking move ahead (and with so much fucking pace) when there no fucking story-arc in there at all!’ I would have added to my question, with clear lack of subtlety owing to shortage of disbelief-expressing wordage in my paltry vocabulary.

So on and so forth…
(You get the general idea, don’t you?)
is what my review of this artist and his creation would have read like, till the very end… If only…

Ah! But The Moor’s Last Sigh was not my first read of Rushdie.

‘The horror! The horror!’ (echoes Kurtz from my previous post on Conrad, as if he knows exactly what I mean)

Let me clarify. I do not say that what praise I have showered on the author till now does not hold true for this book. I do not say that, as saying so would be far from the truth; for the book, or atleast the first three-fourths of it, is a magnificent read, teeming with love and passion for writing prose that the author has demonstrated time and again. It is mesmerizing in certain parts and singularly innovative in others.

And yet I grieve as only an ardent fan can, why o why does a naturally talented writer have to mimic his own work as if going formulaic was the only way to go about the storytelling business?

Why did Rushdie have to do this?

For reasons, intentional or unintentional, The Moor’s is as clear a mimic of Rushdie’s previously acclaimed Midnight's Children, as is my left hand of my right. And unfortunately, to add to that, I can only deem the concluding one-fourth of this narrative to be a disappointingly opaque shadow of the previous book’s meritorious finale.

Of course, the plot, the setting, the characters, the dialogues and the incidents depicted in both books are quite different . (Wouldn’t that be, like, minimum expectation when the writer in question is not Cheatn Bug-gut?)

The narrative this time around has some insane word-tweaking, with a taste and smell that is unmistakably Goan. Page snapshot presented to you below for sampling purposes: 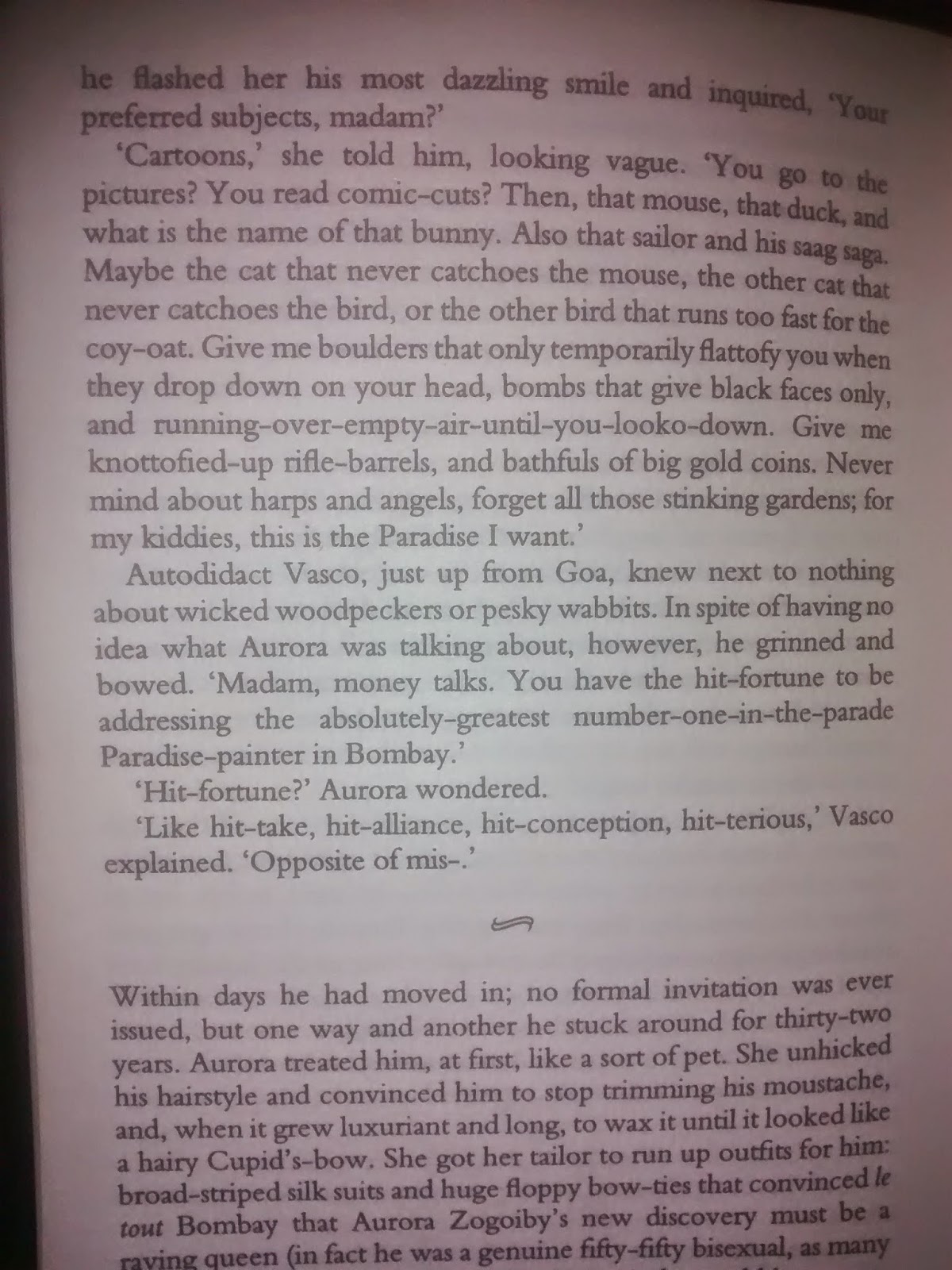 Yes god-damn-it, of course the book is different from Midnight’s in these aspects, and many more.

But how am I to let go unnoticed, the uncanny similarities that still are there between the two? How am I to not see a mirror standing between Saleem Sinai with his abnormal nose and his fatal predicament owing to a somewhat-magical-in-nature ailment, and Moraes ‘Moor’ Zogoiby with his abnormal right hand and his equally fatal predicament owing to a somewhat-equally-magical-in-nature ailment?

How similar are the way these two protagonists then go about the telling of their tales that, co-incidentally, begin two generations prior to their coming into existence.

But wait, o’ quick-to-judge-a-guy-as-cynical reader, as I inform to you that I am not one for snubbing a piece of good writing only because it is formulaic and comparable to what has already been written before. I have, I assure you, no qualm with replication of writing style and narrative pattern.

My contention here is- of what use is such replication if the resultant prose seems simply forced and way too poetic to digest? For that is exactly what I thought of the final act of The Moor’s to be- excessively poetic and simply forced, such that all the goodwill that must have gotten inside my skull from the pages preceding it was wiped away clean, in one single anti-cathartic sweep of loquacious wordage.

And then there is Grimus mode that I need to tell you about (with clenched teeth, quivering lips, and a heavy heart).

Oh fucking Grimus mode- Rushdie’s answer to a tight corner in the story or what we normally call a ‘cop-out’ when it is employed by writers who are not Rushdie.

The only difference is, a ‘cop-out’ by definition means ‘an overtly simplistic solution to a conflict that leads to the conclusion of the story without that conflict actually getting addressed’, whereas the definition of Grimus mode, if there was one, would read as ‘that portion of Rushdie’s story where the lead character decides that it is time for him to leave behind all his existing conflicts, fly off to an imaginary location and encounter fresh conflicts over there that will be much easier to resolve but will take enough time for the novel to reach its end safely before the reader realizes that he has been fucked in the rear by the author.’

Would you like to know more about Grimus mode? Then please do read Rushdie’s debut novel by that name. (Please don’t. Unless you want to know what horseshit packed in heavy philosophy and then wrapped in another layer of highbrow yet moronic sci-fi feels like.)

To sum it all up, especially for the benefit of those who have scrolled down until here in search of a final verdict on the book so they can then forget the whole thing and get back to their lives, I look at you square in the eye and say-

Yes, the book has many flaws. But if you are a first time Rushdie reader, you will be too bedazzled to notice any. So I recommend you to read this book.

If you have already read Rushdie before, I’m sure you are looking for no verdict from me. You know as well as I do that you will be reading The Moor’s Last Sigh, no matter how many of its flaws are pointed out to you.

PS: In what can only be termed as over-indulgence in the abstract, I seem to have ended my review without actually having written anything on what the story of the novel is all about. To make up for this miss-out, I present to you (the only passive solution that I could come up with right now) another snapshot, this time of the back cover from the copy that I have.

Happy readings to all! 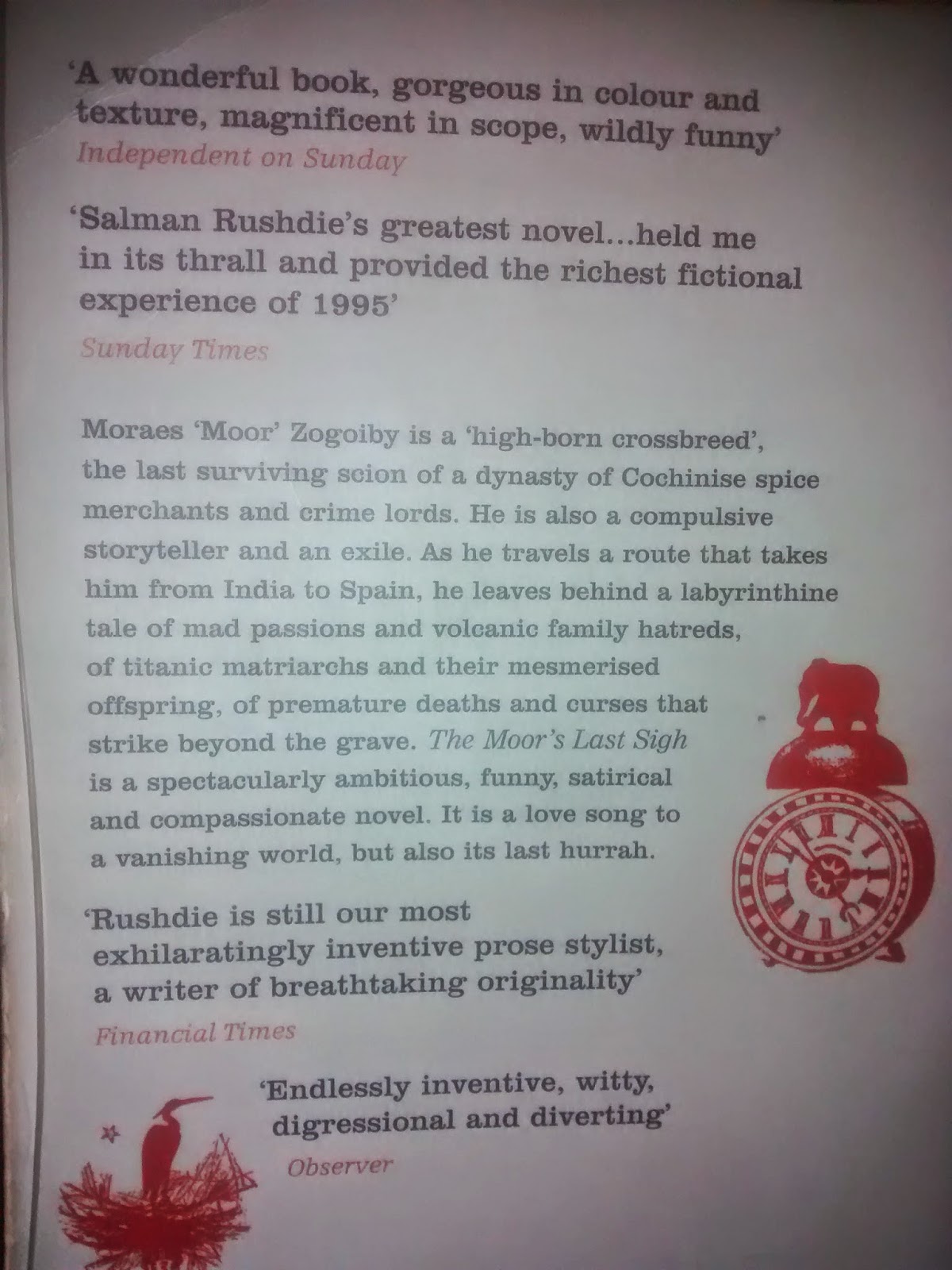 This is a very interesting way to review a book, I must say. That you are able to speak about the book while making it seem like mostly a very personal monologue is either tremendous skill or natural ability. That being said, I must confess to never having read Rushdie. What's a good place to start?