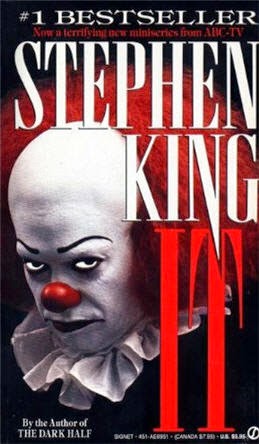 A sense of loss is what looms heavy on me now, not even ten minutes having passed since that final page turned and the back cover revealed itself, virtually on its own. My mind, still reeling, still expecting the turn of yet more pages until it has had its fill of the tale (read-until I’m dead or dying) is proving itself incapable of saying goodbye to the characters who have spent their lives in front of me, all in the mere span of a month.

I am at an acute loss of words as well. I fear (I know) that I may never be able to express in its true sense, the helplessness that overcame me as the mammoth count of thirteen hundred pages dwindled down to a paltry dozen, then half a dozen, finally settling to one, this final page. But I must attempt to express it, before the innocence of instant reaction gets soiled by an overthinking brain and the abundant access it has unfortunately to overthought trivia.

Parting with The Losers Club feels like parting with my childhood friends; imagination and memories interspersed, making it difficult to spot one without the other. Their conflicts were mine during the time they breathed and chattered away inside my head. Their smiles, their laughter…mine too. Adieu to you all, I wave my hand at them as they go, some to their early graves, some back to their own lives that have not been set into words and which are, therefore, as good as death in the readers’ eyes. My heart sinks; I am completely aware that this is just goddamned brilliant writing, nothing else; yet my heart sinks as if I am parting with real people.

Derry, despite its violent, inexplicably violent history and its malevolent secrets seems dearer now then it was a couple of hundred pages into the book. The town that ‘It’ feeds on is real to me.

Derry could be any town. And as I think more about it, I am surprised to find myself nodding at the screen and saying it out loud- Derry IS every town.

Fear is food- Could it get any closer to reality than that? Fear is food. And there is so much to fear in Derry even when you discount the mutilated and lifeless bodies of children that are found afloat in gutters and sewers every other night, is there not?

There is the passivity of people turning a blind eye that sends cold chills down your spine, to begin with; an almost surreal passivity the townsfolk nurture towards incidents that can only mean evil. The land reeks of such a terrifying past, its foundation stones made of dried blood, rotting skulls and melted bones.

And then there is Robert Gray or Bob Gray a.k.a. Pennywise the Dancing Clown.

You can spot him in dim-lit culverts and gusty street corners if you look carefully enough, or more so if he wants you to spot him. A bunch of colourful balloons suspended from strings held carefree in one hand, his other hand beckoning you to come closer… come closer kid, want a floating balloon, don’t you? Come closer then… here, take one and you’ll see it float… we all float down here… you will too… come closer…

The Clown (King) knows what scares you the most, what makes your heartbeat falter and your mind feel every movement of the terror as it crawls its way through your bodily pipelines. He knows best and isn’t afraid to use this knowing. Not one bit, no. Which brings me to the one most pertinent statement that I wish to put down here before the power of first reaction goes away as I move forward to another author-
Stephen King’s IT is the best horror novel I have read so far, hands down.

Yet, all these adjectives are mere ancillaries… side orders loaded on to your table at a fancy restaurant with shiny cutlery, thick tablecloth and mousey waiters fake smile and bowtie in place… loaded to the point that you can barely move your spoon and fork without toppling something over even as the moustachioed midget waiting on you beams wide-eyed and goes, 'Would you like me to bring an extra bowl of salad for you Monsieur?' the clatter and clang of ceramic punctuating his every word.

At its core, Stephen King’s IT is a harrowing and haunting narrative. It manufactures a tension inside you which comes off as such a natural sensation that you are simply overcome by the plainness of the whole damn thing. Through his cringe-inducing writing style that keeps jumping from present to past and back again, King undoes the knots of fearlessness in your heart with an almost leisurely pace, producing image after image of atleast a dozen seemingly ordinary nightmares from which your mind gets to pick and choose the one that will last with you the longest. Also I think the reason why it succeeds so well in inflicting the skin on your neck with goosebumps could be that IT targets the kid inside you.

Heck, I’m a grown-ass man and I got shit scared while reading few chapters. And folks, if that doesn’t count for anything then I don’t know how else to put it up for your consideration.

‘What I wanted to do with IT was that I wanted to write a story about kids but for adults to read. I’d always felt surprised at how nobody had tried that before given it being such an important phase of our lives’- King’s words, not mine.

And I fully fucking agree with him on that. Because to close on my absolute 100% wholehearted recommendation that you read this book, I must tell you, I have never read something like this before.
This is what defines old-school effective horror writing.

And if you think you are that heroic braveheart douchebag who sniggers, ‘It’s only a book you pussy. Only ink and paper with binding glue holding its pants together. And that don’t scare me, even a bit’ then I wont argue with you.

I wont force down your throat the idea that you will be checking your back twice before switching off the lights atleast for half a week or that your ears will flicker and dilate every time a tap starts dripping somewhere in the middle of the night. No I’m not going to make you accept such cheesy nonsense even if it is whats going to happen with you word to word.

In place of that, I tell you this- Read IT. Just read.

And I promise, there will be that one night where you wake up sweating and gasping for breath, the image of Pennywise the Clown swimming in your mind’s eye... shiny white eyes staring at you with a fake red smile, his cracked white facepaint wet and runny, his mouth open- lined with dirty yellow teeth- as his tongue rolls down ten feet and touches the ground like a red carpet unfurling just for you, waiting… waiting for you to get closer… closer... come closer kid, don’t you like floating balloons? 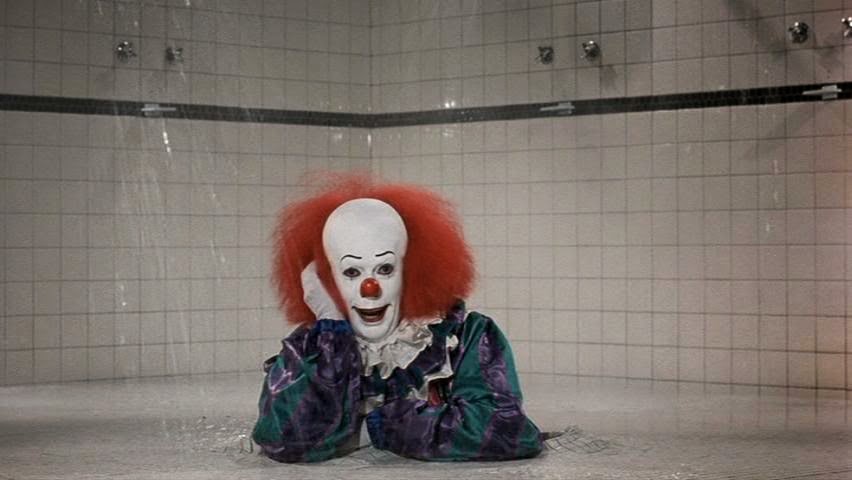 I was always a bigtime fan of horror genre..be it movies or Ramsay Production horror serials but, to be honest, I never got the real scare kick...infact many such things really make you laugh out loud instead of scaring you....but after reading your post on IT (A great reviewer you are by the way, not spilling the beans and still a lot of interest is created) I'm really feeling a sense of terror running inside me which is making my heart leap with curiousity to take the book right away....thanks for the recommendation....

I was worried. When I saw you stealing time to read this, I felt you aren't really giving it what it deserves - the real read, in silence, in solitude, just you and King's words.

Well, obviously you read it right, even if it was in the sanitised environment of BKC. Though it's scary enough, in it's way.

Maybe this is where Pennywise ended up.

Jokes apart, good work, young 'un. IT is beautifully constructed, maybe that's the heart if it's appeal for me. And your review is very well constructed too (which isn't always the case, true, but then construction isn't everything).

And like all good reviews, you've made me itch to pick up this brick-sized book again. More power to thee.

That observation about King able to conjure harrowing images is very true. In part, I think, thats one of the biggest reasons his books are made into films.