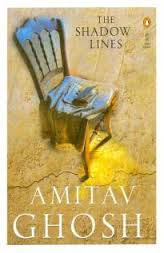 What began as a mere detour from the much grander expedition that I longed to venture immediately into, having finished Kiran Desai’s The Inheritance of Loss has now taken a surprising turn and revealed itself as a separate journey altogether that seems to be equal, if not greater, in standing when pitted against my originally intended read of the Ibis trilogy’s final instalment.

An ingenious piece of storytelling, Amitav Ghosh’s The Shadow Lines may aptly be described as a book that does with history and geography, what Nolan’s Inception and Gondry’s Eternal Sunshine of The Spotless Mind do, respectively, with the concepts of dreams and memories.

Intertwined stories, that unfold parallel to each other despite having transpired in different years and with different generations of a family, are presented to us in the form of a first person narrative where the central character is a young man head-over-heels in love with the power of imagination such that any place or event described to him well enough becomes a part of his memory as if he were the one who had experienced it all. And so with this excuse of having an abnormally gifted narrator as the protagonist, Ghosh – who himself is no less an abnormally gifted narrator- unfurls his remarkable penchant for taking the audience for a ride through time and space that is difficult to believe as achievable through the usage of only words.

Along the length of the novel we meet the narrator’s cousins, his grandmother, a love interest and few others who in turn form the key characters for the sub-plots that are happening in the present or have happened already at some point of time in the past. The book draws several references to events such as the Second World War, Communal riots of Dhaka and Calcutta, the Partition, etc that are fused competently enough into the story to form a natural backdrop for the personal-level conflicts.

Now before I continue to praise the bejesus out of this book, I believe I need to throw light on a few things about myself.

As a kid, I don’t remember ever being fascinated with either history or geography. I never felt the urge to show in these subjects an interest greater than what was requisite to clear and move to the next level of studies. And until very recently, I placed the blame for this disinterest in me on my lack of sympathy towards facts and figures.

Names dates, places, numbers… you name it and wring my collar as much as you want, threaten me with anything you can think of… yet, no matter how significant they are meant to be, these static objects that may provide solace in their steadiness to many others almost always manage to slip through the clasp of my brain like un-tethered geese.

Or, if I were to put it more bluntly, without the application of unnecessarily poetic prose-
I am fucking stupid with anything that involves facts.

Which was why I never enjoyed history and geography…

Or so I believed until a year back even after half a decade had passed since my first encounters with Ghosh and Rushdie whose reliance on facts and figures is quite heavy (though the latter believes in profoundly distorting them before being presented for the audiences’ consumption).

That was when I chanced upon the good fortune of making acquaintance with a certain history-loving Elver, whose long-drawn albeit excellently paced and arced description of bygone events made me question this misconception of mine that history is but a bland collection of facts and figures and is, therefore, not worth my interest. A similar line of questioning also opened up on the subject of geography as place after pictorial place of either historical or environmental significance were described to me by this gifted Elver in such vivid colours that these places- which I had been foolhardy to think of as simply names, in the past- only then became existent for me.

It was during one of these conversations (which not surprisingly almost always happen over generous servings of choice delicacies, the kind only shady joints are capable of conjuring :p) that I understood what the true reason for my disinterest in either subject was- I was never taught history or geography in the right way.

From what I can recollect, the emphasis of the curriculum was always on ensuring that facts weren't forgotten, like chemical equations or mathematical formulae. And while this approach was fine enough to see me through exam after exam where I filled in blanks with the correct names and dates and places and numbers, I was never asked to play out a scene in my mind where a person, of flesh and blood named so-and-so, did on so-and-so date and at so-and-so place, something that has come to be signified by so-and-so number, thus depriving me of the inimitable power of putting one’s imagination to use.

The Shadow Lines is the story about this inimitable power. And it is written so effectively that a mere mortal like me is bound to forget, conveniently enough, that he is fucking stupid with anything that involves facts, and is instead able to view (in IMAX 3D, believe me) the events being described exactly as they transpired on so-and-so dates.

Although I found it difficult to follow at few places, Ghosh does a terrific job at shifting the narrative from one timeline to the other without a break in his writing. One particular scene in a closed attic where three timelines converge into one is simply breathtaking. This may take some getting used to, but definitely stands out as a positive literary takeaway in the end.

To put something so guttural and heart wrenching into words, I am at loss here. But I can tell you this- I was left with the hair on my arms standing, the back of my neck perspiring, and my mind unsettled by the time I reached the last line of the last page.


To conclude, as with any other book written by him, I cannot help but recommend Amitav Ghosh’s Shadow Lines to any living soul who wishes to understand how vibrant and deep one’s perception of our collective past and our collective present becomes when one learns to apply his imagination to the study of history and places.

It is an astounding trivia indeed that a book published in the year of my birth still has the capacity to leave me shaken in this day and age.
at 12:11 AM

Thank you for the mention. It's also rather surprising, since I'm reasonably sure my digressions make me a bore rather than anything else.

That said, what is Geography but the story or humanity's relationship with the land - an attempt to understand the world we live in? Understanding Geography is understanding why we grow the crops we do, why typhoons happen in Middle America and thunderstorms in the North, why the Niagara Falls are majestic in their grandeur while the Yamuna is indistinguishable from a drainage canal.

History - with all it's distortion and the dullness with which it is taught - is the greatest story never told. It's our collective memory, it's the story of the great European conquest of America and the brutal oppression of the Native Americans, it's the story of England's cruel colonisation of the Orient and of how a tiny Island with terrible weather grew to conquer half the world. It's the story of the might of Rome, the resistance of the Goths, the cruelty of India's Hindu kings and the generosity of it's Muslim Emperors, the subjugation and emancipation of people.

How can these subjects not be fascinating? The fact that they are, in fact, taught so boringly says more about the lack of quality in our teachers than the content itself.

Oh, and great review. But I told you that already.

This is an excellent review. As a reader this is what I look forward to in a review.

Thank you old chap. Your comment means a lot to me.

Thank you for your kind words. :)