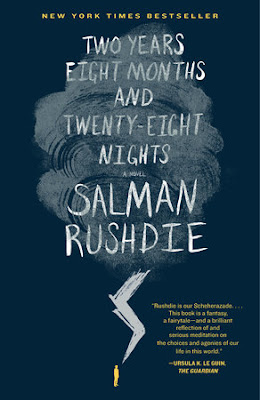 I just hate it when time plays spoilsport.

So now, instead of the long rant that I had planned to unleash upon the unsuspecting audience (which I still will, but only in a few days) I am having to console myself by merely giving a rating to this book that I finished reading yesterday.
However, the out-of-the-box thinking chap that the author is, it would be most unfair if I rated his book using anything but an out-of-the-box rating scale wherein I refrain from comparing his book, to books written by other authors who are, well, not-Rushdie and by that definition simply NOT presentable on the same rating scale that Rushdie's books can be rated using.
As a consequence, I have no choice but to present my verdict in the following manner:
On a scale of Grimus to Shalimar the Clown, Grimus being the lowest rating assignable followed- in that order- by Haroun and the Sea of Stories, The Enchantress of Florence, Fury, The Moor's Last Sigh, Midnight's Children, Shame and then Shalimar the Clown; with Shalimar of course being the highest rating possible, Two Years Eight Months & Twenty-Eight Nights, in my humble opinion, falls somewhere between Grimus and the Enchantress.
How I wish the author understood the importance of remaining tethered to a discernible plot-line!
I wouldn't say this is a bad novel (because it isn't), but it most-certainly is one of his weakest stories yet.
at 12:26 PM