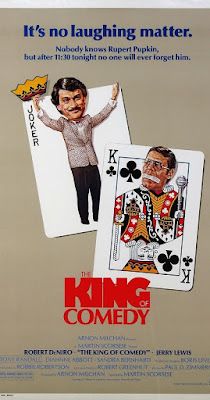 This is criminally underrated.

A re-watch of the film after over a year, only made me find more positives and no negatives to talk of.
Lets face it- I find Scorsese's style mesmerizing. His ability to keep the audience invested in even the most irritable, irritating and irrational characters- characters whom if you met in real life, you would want to 'un'-meet if possible and at the earliest too- is inimitable.
Like other serious cinephiles, I have watched enough of his films to testify that his sense of music, his usage of camera movements and of course his quick but surefooted editing style (that has now become a trademark) are captivating enough to make one want to watch and watch the same film again and again without any qualm.
With The King of Comedy, he only adds one more example to prove this point.
Plus, Robert De Niro as the desperate albeit moronically positive Rupert Pupkin is a great departure from his other popular roles. Pupkin is not the macho, alpha male role one would associate De Niro with. He's an out and out geek.
Pupkin's misplaced sense of entitlement, the small glimpses into his private life and the deranged extent to which he is convinced of his talent make the plot so unpredictable while remaining grounded that despite the outrageous means he uses to succeed in showbiz, there are moments where you want to root for him, followed by moments where you do root for him.
But then he pushes it a little too far for you to feel comfortable rooting for an idiot (or rather, for you to admit that you were rooting for an idiot all this while).
Sandra Bernhard's Masha is the most irritating onscreen character I have ever seen in the two decades of my movie watching experience. Period.
Believe you me, I have seen plenty irritating, but this is so perfectly done that you just wish she'd drop dead before the next scene comes on. To pull off such a performance is not only remarkable but also a tad bit insane.
I can only wonder why I haven't seen the actress in any memorable role ever since.
Jerry Lewis as talk show host Jerry Langford, the guy who one might say is the eye of the storm, plays it restrained and manages to hit the right notes at all times.
The sanity of his presence almost naturally balances out the insanity of the rest of the cast.
Overall a fantastic film that leaves you on an inexplicable high that is hard to experience outside of worlds created by Scorsese.
A definite 4 out of 5.


I must recommend this to all.
Catch Trailer here: