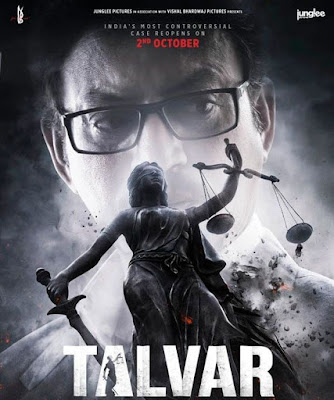 I should be pleased to have come across India's official answer to Bong Joon-ho's South Korean masterpiece Salinui Chueok (Memories of Murder) in the form of this tight and tense drama presented as a fictionalized account of the real-life murder case from few years ago that caught the fancy of many, mostly due to the perverse details involved.

I should be very very pleased.
As a film, Talvar scores high in all departments right from the script, the camera-work, the sound design, the dialogues and- most importantly- the acting. Irrfan Khan steels the show again with his effortless portrayal of the lead investigator assigned to the case by CDI (Read as - CBI), but not before the local police have irredeemably botched it all up. The casting for even bit roles is spot-on.
The drama is restrained and kept subtle wherever possible to not hint at a prejudiced take on things.
So unlike other films based on real incidents, all the alleged culprits behave like humans instead of ham actors playing culprits who know they are supposed to look innocent but cannot look completely innocent for benefit of not ruining the suspense.
I am yet to read Avirook Sen's Aarushi and so would not be in a position to compare fact with fiction. But as a film, this is nothing short of a Fincher level production from Meghna Gulzar.
For which, as I have said twice already, I should be very pleased and therefore be giving the film a four out of five.
But I will give it a full five.
For the film, just like Joon Ho's, did exactly the opposite of pleasing me when the end credits began to roll.
It left me helpless.
Catch Trailer here:
at 10:54 AM