Behind The Beautiful Forevers- Katherine Boo 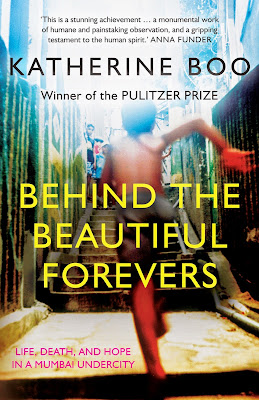 The first thought that strikes one’s mind on coming across a book that goes by the title ‘Behind the Beautiful Forevers- Life, Death & Hope in a Mumbai Undercity’ is – This is going to be one mushy narrative.

And when you do read it and when you do understand that this narrative is no ‘mush’- even though it’s not a lot of other better things either- you have to commend the writer for that (atleast).

So, in my attempt to keep that principle intact, I mention the first thing first- this here is some serious writing.

No soppy stuff involved, which meant that I could actually finish the book without rolling my eyes or yawning or wanting to do something else like picking my nose which- I believe- is a way more stimulating experience compared to reading crappy contemporary city-based romantic comedies produced by people whose claim of being writers is as unnatural as a guy claiming his right to romancing a goat (no religious angle intended).

Matters, most pertinent to the modern day existence of a person in Bombay, are presented in the book and what more, from the point of view of the underprivileged.

Poverty, corruption, greed for power and the resultant lack of access to the bigger picture which in turn results into petty ambitions and further lowering of living standards; Katherine Boo is able to competently present this vicious circle to the readers by documenting half a decade of the lives of slum-dwellers of Bombay, one slum to be specific- Annawadi, situated right on the outskirts of our city’s International Airport.

A teenaged garbage sorter falsely accused alongwith his family of burning their disabled neighbour to death, a habitually promiscuous one-legged woman who stretches her need for revenge a little too far, a middle aged mother aspiring to become the slumlord of Annawadi through any means available, her innocent daughter, and a few garbage scavengers living more hand-to-mouth than anyone else in Annawadi, form the primary troupe of characters. Through them, Boo demonstrates how difficult it is to move up in life when money controls even the most menial of tasks, when everything comes with a price tag and when people around you are only looking out for their own skin.

The more one attempts to go up, the steeper and more slippery it gets until that inevitable tumble happens in the form of an airport redevelopment plan threatening to bulldozer the slums, or a terrorist attack that wipes out half the city’s tourist magnetism, or a criminal case filed against a family member that runs into several months and costs everything saved.

As the author’s note at the end mentions, all characters and names are real and have been incorporated into the story based on rigorous research involving observation through physical presence, first person interviews, multiple third person interviews to cross-verify the facts and hundreds of RTI applications. Obviously now, one can’t complain about finding fault with the plot of the book given this explanation, unless one wants to embarrass himself.

So I won’t go there.

Nonetheless, it is time I move on to the not-so-nice part of my review, before a trusting reader is misguided by my words into believing this to be the next ‘White Tiger’.

What is a good ‘documentary’? And more importantly, in terms of the written word, what exactly can be said to be a good attempt at writing ‘creative non-fiction’?

For me, neither of the above count too high as parameters, especially when the piece of writing we are talking about is a full-fledged two hundred and fifty pages long.

The one basic filter that I would automatically want to apply on such a book is- Are the ‘people’ in the book becoming ‘persons’ for me while I’m reading? If the answer is negative, then I see no difference between reading the book and reading directly the facts and figures off a response to an RTI application.

Unfortunately, crossing this filter is not every writer or documenter’s cup of tea. For instance, one cannot simply create descriptions and events out of thin air to make this possible.

And while, the author does manage to accomplish this to some extent with Abdul, the garbage sorter and a few others, there comes a point in the narrative, beyond which, it becomes quite blatant that the author is only writing of those portions of these lives that suit best her agenda of wanting to show a poor, divided, corrupt and power hungry Bombay (read as India-bashing), which is a silly way of approaching both the genre and the subject matter, unless you are writing a response to an RTI application and not a creative non-fiction book.

Another beef that I had with it was the lack of depth one would expect to come across given that Boo had FIVE years to observe ONE slum area in particular, not even the whole city, even if there are portions that deal with the problems faced by the city as a whole. By depth here, I mean the depth in depiction of the characters.

This, I could attribute to her being a foreigner, which would definitely have played a hurdle in her becoming acquainted with the inhabitants the way an Indian national could have with ease. But again, as I read through her note at the end, she talks on one page, of her belief that ‘devoting my attention to the handful of Annawadians who possessed a verbal dexterity that might have provided more colourful quotes' would have led to a more distorted presentation of the story. Which feels correct, albeit only to an extent.

For, it could be that what the reader is being deprived of due to her belief, is not only these colourful quotes which would have kept the interest levels alive but also the possibility of Annawadians being imagined by the readers as human beings having lives of their own instead of just some ‘poor, hungry people’ who face enormous quantities of hardships at every corner. Afterall, aren't imperfections and eccentricities what make us who we are? (infact, her description of court hearings, though only few, are quite evocative and memorable exactly because she captures these eccentricities alongwith the rest. So I'm even more surprised as to why she would refrain from doing it at other places too.)

Also, I believe a bigger length would have helped in fitting these enormous quantities of hardships into a more natural flow of events instead of forcing them together into big lumps from time to time, which just seemed counter-productive to the ultimate purpose of making the audience feel for the characters.

I'll revisit this comment later, but basis the review I am now wondering how much of the lack of comprehensiveness might end up being down to an over enthusiastic editor. If so, it would be unfortunate. I think you manage to bring out enough merit to make this sound like a book worth reading, though.

Good Reco bro. There most definitely is a problem in the way we talk about the poor.

I didnt entirely get the India bashing part.

As a complete aside Kat Boo would be a great name for horror story writer.