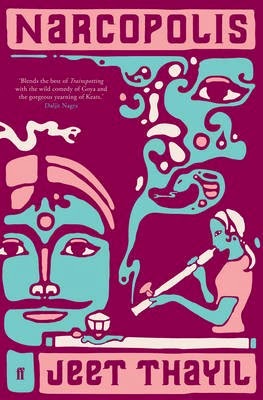 Jeet Thayil is a performance poet, songwriter and guitarist, and has published four collections of poetry till date. Narcopolis, long listed for the Man Booker prize 2012, is his first attempt at writing a full-fledged novel.

“This is the Old Bombay as seen from the slums and the gutter, the city illuminated in all its sweat and temper…. Original and vital” – Daily Telegraph, reads the front cover.

To begin with, having read the bloody book makes me wonder how atrocious the bloke must be at writing poetry and songs, or is it (as Sensei Elver keeps pointing out during our discussions) that poetry is inherently a bad medium for judging a writer’s literary command, thus making me wonder again if I should in fact refrain from even mentioning his poems and songs, forget questioning the evidence of them being non-atrocious; for a poem is often deemed non-atrocious these days not by the amount of ‘motive’ it has attached to it, but by the amount of abstract crap it is able to unload unto the barren, untilled tracts of tissue that form a docile reader’s brain.

On a side note, if you feel that the above para is digressive and has little meaning, you know now exactly how I felt while reading Narcopolis.

Pointless in its telling and seldom presenting the reader even with the semblance of a central plotline, the book is a disjointed collection of interesting character-centric subplots hastily tied together by the single fact that all of these characters are either opium abusers or opium peddlers or in some cases both, residing in Bombay. Thayil begins with a prologue that is singular in style. Presented through the eyes of an unreliable narrator who is hallucinating about the past as he sits smoking in an opium den, the prose reminds you of Rushdie’s brilliance in places and assures of a promising experience to follow, which, to be honest, holds true even after you are a hundred odd pages in and already introduced to a handful of grounded, intriguing people as the novel’s protagonists.

A bleak painter cum poet who is eternally drunk, a rich man who believes getting high is true freedom, a eunuch who works nights as a prostitute and days at the opium den, the den owner, his chamchaas, his competitors, his clients and not to forget, a serial murderer who targets beggars sleeping on the streets after dark- all are fresh perspectives and also very interesting. Of the bunch, I craved to read more on the back story of one Mr. Lee, an old man and small time opium dealer who arrives at the city as a young foreigner on the run and never leaves once he makes acquaintance with the sea.

Writing a harsh novel doesn’t amount to shit unless you have a purposeful story to tell, harshly told or not.

Also, a story, especially a long one, has to have a purpose, even if that purpose be presented as a subtext, buried beneath layers of character and conflict complexity. A purpose that forms the central arc of the story, beginning at the beginning, covering the length of the book, hovering over it till the very end and sometimes even beyond if the author has left the end open for interpretation. The purpose, once a reader digs deeper, has to surface if not in its entirety, then atleast as an enigma that would then need further deciphering through rereads and discussions between booklovers.

Could ‘pointlessness’ be the purpose of a story? – asks one, experienced in all intangible, interested in all abstract.

Yes, it could. And it is. (They have a whole genre for such stories called existentialism).

And I fucking hate pointless stories. So theres that.

Then there is the quality of writing- commendably distinctive at the beginning with long, endlessly free-flowing sentences that whisper secrets inside your ear seducing you into reading on; impressing in the first two chapters (Thayil calls the real chapters as Book one Book two, etc and the subsets to those as chapters which he begins and ends randomly at any goddamn point for no reason at all); then, once chapter two is done, it becomes terrible. A glimpse here, a glimpse there of the greatness promised at the beginning, maybe. Otherwise nothing.

And honestly, what the author lacked in other scenes, I thought he could have easily compensated for with decent writing in the sensual bits atleast. But no, he doesn’t seem to have any particular talent for that either. Some of the explicit descriptions are outright hideous and written so tastelessly (Oh, how I miss Rushdie at these moments) that they invoke no emotion at all, if you know what I mean.

All in all- Just sloppy penmanship.

Narcopolis is not an ode to ‘Bombay of the ‘70s’, as the synopsis at the back would have you believe. Capturing a city’s history in all its compelling squalor and capturing shit, piss, garbage, the ugly and/or the poor in each and every scene are two different things. Further, while I may not be a staunch advocate of the 70s as pictured by big-budget Bollywood, I do have a beef with anyone who pictures the city as merely a metaphor for stark economic divide housing hopeless inhabitants who keep learning harsh lessons on philosophy and existentialism almost every alternate day (surprisingly at the drop of a hat). 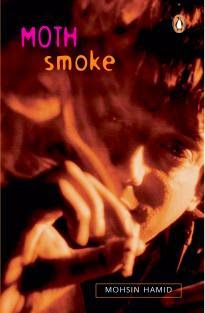 A novel on Bombay demands much more.

But these are trifle observations. Easy to overlook. Easier to forgive. But bad writing? Hell no. That makes or breaks the deal.

Definitely not worth recommending.

In its stead, do read ‘Moth Smoke’ by Pakistani Writer Mohsin Hamid. Or better, read both and compare.

Below excerpt from Moth Smoke for your consideration: 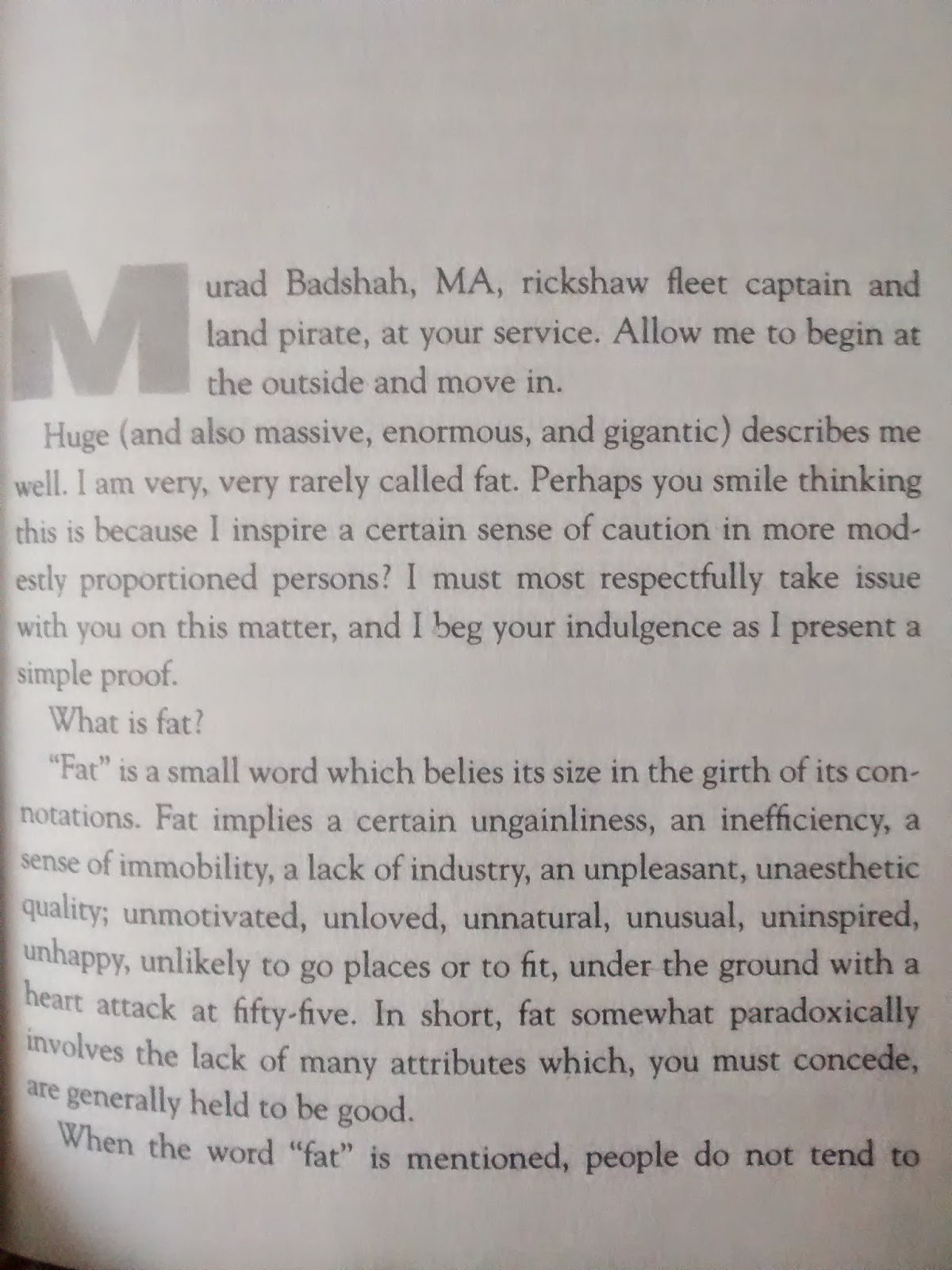 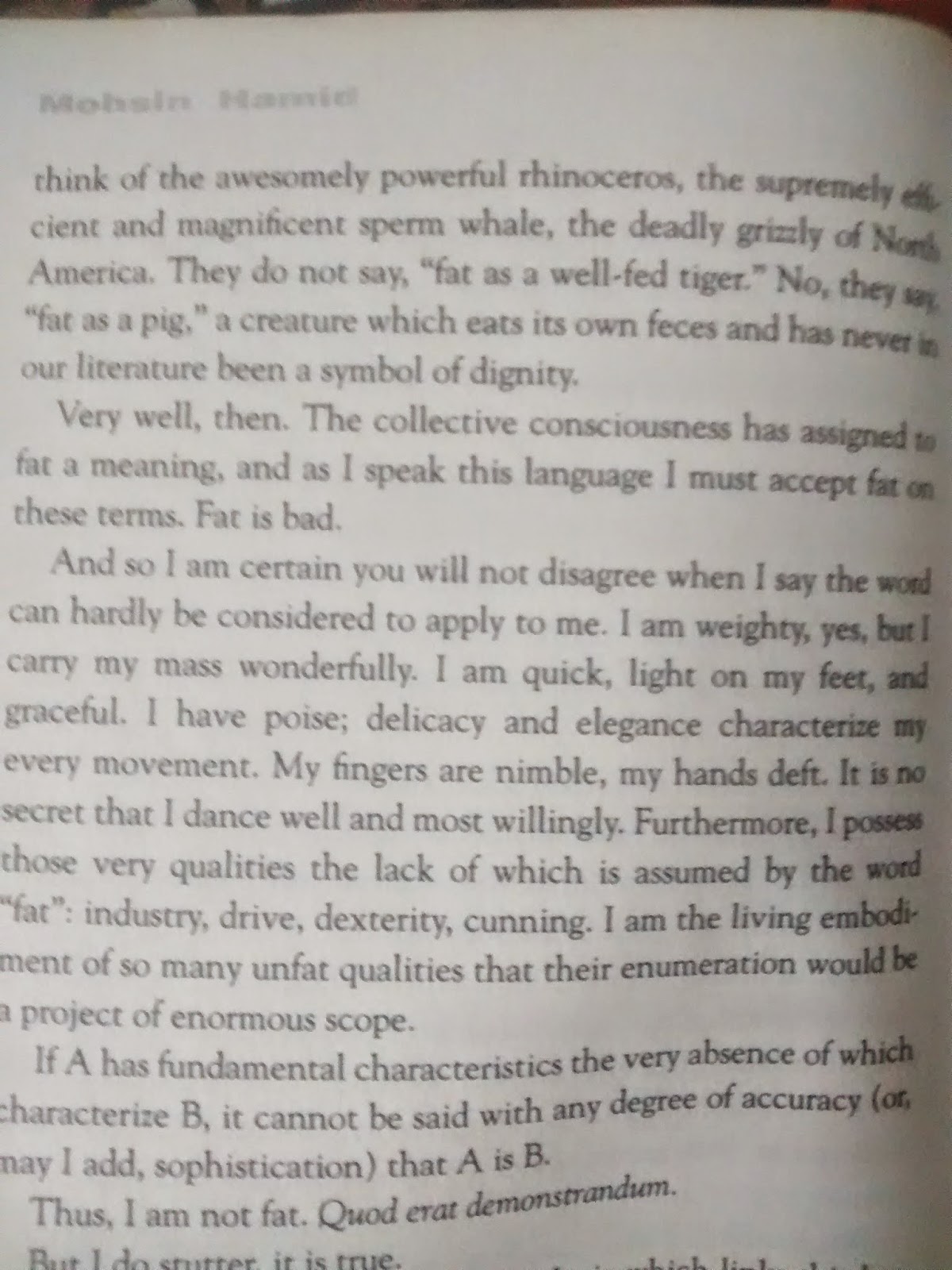 Your expectations from sensual scenes have been unrealistically heightened by a certain ficlet called "Pride and Shame". Avoid the temptation to compare all erotica thereto.

Well, one tries not to compare, but one fails miserably sometimes, especially when the author himself seems to hold no great passion for what he is showing through his writings.

Fecking hell. Read the entire thing (despite having scarce time to). A rant well done - pointed, scathing, and critical. Also, the two snapshots at the end were just beautiful. I will here-forth call myself well-rounded.