Catching up on other things


Has been quite a while since the last time I felt like ranting on about something in public. But, I am me, as I know already. I do not go out on walks, handing out sermons on what and what not I enjoyed doing over past few weeks.

And so I thought of resorting again to the ever reliant, if not inferior means of communicating with others. In any case I always was a better writer than an orator as I recount now. And this way, my audience (you) can choose their time of convenience to be bored/entertained by my rants on few things which I feel like sharing from time to time. Or you (my audience) may choose to skip entirely. So here goes.

I recently read three books in quick succession. Two in a single week infact and both were powerful enough for me to simply forget what the first one was even called. Written by the same author, Mohsin Hamid, yes, of Man Booker Prize nomination fame.

There is something so honest and truthful about Pakistani writers. I am forced to feel bad that majority of our country shrugs off our neighbour as a dead state. I do agree that as a politic and as a democratic entity Pakistan is as dead as roast meat. History speaks for itself that any country having religion at its base does not take long to transform from unpretentious autonomy to authoritarian tyranny. And so in a century’s time, or even less, perhaps the world will acknowledge collectively the green on their flags and the elegant half moon with the star in the middle on their uniforms to be wrongful. It may go on to be so or it may not. (I pray India does not go down a similar road.)

Yet I am forced to keep an unassuming view as far as the people there are concerned. Because, if I am truthful to myself, apart from fleeting glimpses of mobs burning effigies of Indian politicians and snob faced reporters narrating botched up stories of India, not Pakistan, being the source of terrorism, I know nothing about what goes on there day to day.

And it so happened that both times that I put down these books having read the last sentence off the last page of each one, I felt mesmerized by the fact that how something that many of us, as patriotic Indians, consider to be ugly as a country in totality still has such beautiful themes to offer in terms of literary art forms. And when I say this, I am not at all basing my conclusions on the work of a single person as it just so happens that a month back I had also finished reading another Pakistani novel by the name ‘A case of exploding mangoes’ by Mohammad Hanif, who has unofficially been bestowed with the title ‘Rockstar of Pakistan’- most befittingly- given the popularity this debut novel of his was able to garner in the short span since its publishing.

Hanif is utterly brilliant in his narrative and the book is what I would call a must read for any book lover who wishes to be enthralled at the same time with rib tickling wit and gut wrenching truth cum reality. ‘A case of. . .’ came as more of a shock to me than a surprise because even the synopsis at the back of the book conveyed so little about what the experience would be like while reading it. I had shown so much reluctance while taking it off the shelf and when I began reading I realized I just couldn’t afford to take even a single pause. I ended up literally living with the novel for one whole week before I could reach the end. I have to express again to you (my audience), the book is a must read, if not for its political correctness, then merely for the brilliant storyline (plot: the real/fictional story behind Pak president Zia ul Haq’s plane crash of 1988 that was surrounded by a dozen conspiracy theories) 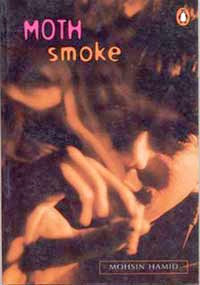 ‘Moth Smoke’ was the first of Hamid’s two that I began with. It is-like the other-a first person narrative of a young man named Darashikoh Shehzad’s spiraling downfall from the heights of academic genius and promise to drugs and ultimate imprisonment. The best way to describe it in one sentence would be- Imagine Dev D, but with a certain emotional undercurrent of flowing gloom that that film lacked in my view. The character portrayal and the narrative style utilized by the author are so subtle that it seeps into your blood and the gloom that lies in the form of words on paper and ink are suddenly inside you, surrounding you- you are breathing it.
A hundred pages into the book, I could barely feel any weight on my mind other than what weighed down the mind of the story’s protagonist. It is-I must add- also a deeply personal tale of love found and lost, as is ‘The Reluctant Fundamentalist’, of which I will speak in some time. I was most impressed by one thing and that is the simplicity with which the author conveys such grave issues like economic inequality as well as such intimate issues like personal independence, desire, lust and betrayal with equal prowess and grace. A good novel, as explained to me by an AVP who took me on in an interview at a Broking firm a year ago, is one which melts the words from before your eyes and only leaves you with the scenes in your imagination much like a film, only much closer to your senses. I recollect that now as I recollect the experience of having read this book. 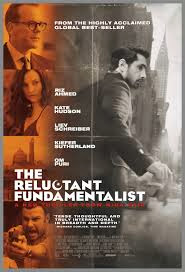 Which brings me to the second of the two, The Reluctant Fundamentalist-the novel that is now a ‘Major Motion Picture’ as the front cover, bedecked with photos of semi-famed actors, shouts out proudly (The movie tanked and critics hated it, no doubt. I am seriously surprised at the choice of novels some people make to convert into films. first Midnight’s Children, which I still firmly believe is a story beyond the capacity of images, moving or still, to replicate because the entire book is based on smell as the binding force or ‘Sutradhar’ as some would call it. And now this! Where exactly is that big a story in this 184 paged book to be acted out by thespians, I am dumbfounded. Yes, agreed that if it is a monologue in a stage play that we are talking about, then it is quite possible to enact this story. But a film, not a chance!)

The book, again a first person narrative, speaks of the story of Changez, a Pakistani boy who moves to the States to pursue his dreams, the American Dream, to be more precise, and the effects that the events following 9/11 have on him. Again, at the crux of it all lies a love story and the manner in which the author manages to envelope the macro issues of a brown skinned man with a beard living in New York with the problems of a heart broken youth is surreal. Ideologies are not shaped in silo, as I interpret it, is the key moral of this tale for me. Events happen, people feel, people ponder, people think, and then people change in terms of beliefs and thoughts.

Purpose of life is defined by events that transpire around us and not by the mere fact that we choose one befitting our skill-set. It may so happen that we embrace blindly what life has chosen by itself as our purpose and continue to believe that we were the driving force behind such decisions, but it is not so and even if it is, there is no saying that some event tomorrow or the day after shall transpire leaving a giant hole in our projections’ blueprint. Then we change accordingly. Life is governed by many things that are beyond us.

So is true in the case of Changez, the protagonist, as well. I reached the end of this novel, or rather novella, today evening. The end-as is the problem with many-a-brilliantly written story-was, I must say, underwhelming. But the content as compared to Moth Smoke was stronger and more pertinent to today’s global ambience of ever growing discrimination between blacks and whites. Still if you asked me to rank the two against each other, I would consider Moth Smoke as a better book in the same way that I consider ‘Between the assassinations’ as Aravind Adiga’s better one when compared with ‘White Tiger’. There is a certain depth that I like to see while reading which I have come to associate with debut novels. Hence, the bias for Moth Smoke.

Watched a few films recently, The Lunchbox being the last one. It is indeed a very good film but, surprisingly, I didn’t find it to be that moving a story. Now I don’t know whether that is a problem with the film or a problem with me and my preoccupation with Mohsin Hamid’s colossally impacting narratives. But one thing I can state with confidence that I vouch for A Separation which is an Iranian film by Asghar Farhadi to be one of the best films that I have watched till date. The treatment and the pacing of this movie, you will find once you’ve seen both, is quite similar to that of The Lunchbox.

Also worthy of a mention is a 2001 TV Movie that goes by the name Conspiracy that was recommended to me by another movie buff of a friend. If drama as a genre interests you, then this is THE film to watch.

Taut, gripping, ace actors giving their honest best. Much like Sidney Lumet’s 12 Angry Men, only much more chilling in terms of its content and sheer reality of dialogue. (Plot: The meeting of 15 Nazi high ranking officers to find a permanent solution to the problem of growing number of Jews in Europe) 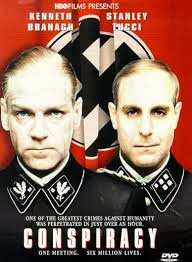 Takes a while to adjust to watching English actors playing Nazis.


But once Colin Firth and Kenneth Branagh begin mouthing their lines, you will have sheer awe and nothing more on your mind.
at 2:36 AM

If pakistani writers interest you, Saadat Hassan Manto is a classical legend of sorts You can see he could forsee pakistan's todays condition the (in 1947).

JFK makes you crazy, conspiracy takes you to the calm behind the crazies.

Thank you for sharing your very valuable feedback on some of the good movies and books...Will definitely go through the same.

Such a flowing review. You sir, are a king among reviewers when you choose to be. To put forth in words what a reader *feels* is a rare talent. I lack the necessary ingredients to emulate you, though I think I also reviewed Moth Smoke.

Nonetheless, having read MS and TRF and seen C, I must say your taste in media is mostly impeccable. Mostly.